We got up at about five ’til five today. Well, I say we – I actually slept until about 5:40. Stephanie got up at 4:55. We got ready and headed in to the hospital. This is so unlike Callie’s birth where Heather’s water broke and I tore off down the rainy highway at close to FTL velocity. This morning we were prepared, we know Stephanie is being induced – or having a c-section – and knew that there was no rush. We could just sort of drift on in. We needed to be there at a certain time, but that’s something you can plan for. If the water breaks, you gotta haul.

We arrived and they got started with an IV drip. Our first step in this process was to have the baby verted. Its head was still up as of 21:30 last night. We prayed that God would turn the baby so we wouldn’t have to go for the version. That’s a very dangerous process that can cause all kinds of bad things to happen. Things of nightmares. Bleeding, hemorrhaging, up to and including loss of the child or the mother. So yeah, mark me down for being a little bit nervous.

Stephanie got her epidural in preparation for the intense pain of the version process. She squeezed my hand and we got through it. I personally can’t imagine having someone stick a needle in my spine because I told them to. If it were a life-saving alternative to a failed procedure, then yeah – do what you gotta do. But I would never opt for it. So that went okay. This medicine can also have dangerous side-effects.

The doctor popped in around 7:30. We’re happy to see him. So he dropped some gel on her tummy and did a quick ultrasound. Now it’s hard for me to right well convey the sense of emotion that swept through here like a tidal wave, literally causing me to have to take a seat. I’m sure I’ll be feeling some intense emotion here again pretty soon when my precious newborn makes his or her grand entrance into this bright, cold room. But for now, let me try to explain to you the grand uplifting and glorious rush of emotion and grace I felt when Doctor Reigel said, “The baby is headfirst.”

In fact, I don’t think I can. But there were tears and quick but lengthy sighs of relief. So there’s a pretty good chance that in the last eight hours (we felt the head last night up under Step’s left ribs, so it was still breach) that God himself reached into her womb and turned that baby to the proper position. I didn’t see him come into the room, but that’s probably because I was asleep. Heh.

Everything is good now. The medicine kicked in about fifteen minutes later and handed us a nice scare when Stephanie’s blood pressure dropped to ridiculously low levels. She began feeling nauseous and light-headed to a degree I can scarcely imagine. Then the baby’s heartrate dropped. And so did I.

I hit my knees at the end of the bed, grabbing Stephanie’s ankles and praying again. I was trembling and holding back strong the need to lose control of my tears. Somewhere deep in the recesses of my soul, I knew my God wouldn’t right this baby and bring us this far only to let it die because of the very medicine that was supposed to facillitate its arrival. After all, Stephanie only has one tube. And after six surgeries on her stomach and ovaries, it was unlikely she would ever get pregnant. It was – as she told me – impossible. Well, here we stand, and based on the size of Step’s belly, I believe we truly are having a baby today.

The baby recovered. It – as they said – took a dip. While the nurses rushed around and pushed on Step’s belly, turning her on her left side, giving her life-saving medicine, calling out medical terms and procedural jargon I was not trained to understand, I prayed. The baby’s heartrate did return to normal. And all said and done, it was probably only a three-minute dip. But that three minutes to me was three forevers. Stephanie said “Thank God” from beneath her oxygen mask. And now I trembled with relief and joy. This trauma is more than I was expecting to experience today. But if ever I needed faith, today was the day God delivered.

Now we’re waiting. She’s at two centimeters dilation and fifty-percent effaced. We may be here for another ten hours waiting for our new one to arrive, or it could take thirty more minutes. We will be here either way. And I will continue to update as things happen. I just hope they don’t scare me to death when they do.

Let me post a picture of Laynie Faith for you. I’ll get back with the play-by-play when I have a spare minute. A little overwhelmed right now. 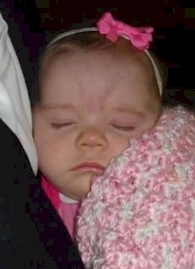 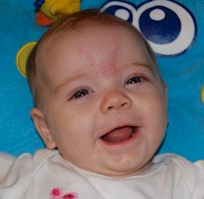 Yes I saw The Notebook. No, I didn’t cry.

My Run-in With a Pedophile