Are any of you married? I don’t know if that really matters. I think the more relevant question is, “Do you know a woman?” This question is really only aimed at the men though. So, men, do you know a woman? And secondly, does she have a purse? Because OH MY GOD. My wife does. And I’m not talking about the two-hundred-dollar job she bought from some online French retailer. It cost sixty bucks to ship the damn thing. And when it got here it looked like a nylon bag to me. I mean, props for the orange rubber handle, but dude – seriously? It looked like a ten-dollar cheap-ass Target job.

Well, I guess I sort of am talking about it. See, I’m actually going to talk about all of her purses. She has several thousand, I’m sure. It’s ridiculous. I actually had to build an add-on to our closet just to house all her fine luxury purses. And we’re not talking Target job shit here. She only buys the finest handbags made from the finest material. Like Indonesian Batwing Silk, South African Lion Mane Weave, Alaskan Malimute Pelt and Egyptian Dung Beetle Chiton. And she always tells me how great of a deal she got on them. “Oh but honey, this Hungarian Elephant Scrotum Silk one was on sale for half off!” Oh, that’s great, babe. So how much was it? “Three hundred and sixty dollars. Can you believe that deal?” she says, wrinkling her nose. No. I can’t believe it. How could anyone pass that up? Why didn’t you get four of them, sugar?

But I’m not really here to talk about the quality of fur used in her purse. Or the size of the Austrian Jumping Camel they used to mine the fur. I’m not really even talking about the quality of the purse itself, how expensive it was, or whence she had it shipped. No, I’m not even talking about the sheer ridiculousness of the number of purses she owns. No, friends. I’m here to talk about physics.

Purse Physics is actually a post-graduate pursuit. You can literally major in Purse Physics with a minor in Heisenberg’s Handbag. That’s a cute little pseudonym they applied after years of calling it The Foreign Principles of Physics and Ridiculous Dimensional Characteristics of a Woman’s Handbag, Purse or Makeup Bag. See, there’s something terribly mischievous going on with the laws of physics inside a woman’s purse. Or, in this case, my wife’s. That’s why no one truly understands it.

One of the biggest problems is understanding the trans-dimensional intersection they sew into the zipper or flap mechanism. You see, once your hand enters into the purse, through that opening, it has actually traveled into another dimension. Which is cool, because that means the woman is actually storing the stuff without using up space in her own proximity. The only problem is that when mass just suddenly disappears from this dimension and into another one without warning, the weight is left behind. So if you drop an eleven-pound brick of roasted cockroach mayonnaise into her purse, she will feel like she’s carrying that eleven pounds.

But the upshoot of all this is that when a woman sticks something into her purse, it’s being stored in a dimension Somewhere Other Than Here. In the Purse Physics classes, they call this the SOTH dimension. Now, depending on the competence of the purse maker, you can end up with a really nice slice of SOTH in your purse, and – like my wife – have the ability to carry around a freakin’ Buick on your shoulder.

Yes, I’m serious. Every time I go digging through my red-haired wife’s purse, I get both arms in that son of a bitch, and usually my entire upper torso just to find my puffer or a stick of gum. There is literally more space inside the purse than the outside purse allows for. It’s like one of them Heisenberg Houses you can get in Florence where the floor plan is bigger than the outside dimensions of the house. It’s awesome, but they’re damn expensive.

Let’s get a woman’s take on this real quick. Let me give our friend Haycomet a shout and see what she has to say about this. So, Hay, how big is your purse? What do you have in it right now?

First of all, Space, If you want a woman’s point of view, I can’t help you. I can give you a chick’s view though. I despise large purses! The one I currently use is about 10″ x 7″ x 5″. Oh, and it’s covered in skulls. It’s not the smallest one that exists, but it is far from the biggest. It cannot be heavy either. If it starts getting heavy, then I know it’s time to clean it out. Let me show you a picture. 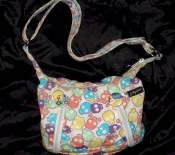 I shove a lot of crap in my purse, let me see what’s in there now. Okay, here we go:

No matter how small, mine always have that darn trans-dimensional intersection. It’s ridiculous! I bought my pocket book from a consignment shop, and the previous person actually left it intact. It would have been fine with me if she had taken it, then it wouldn’t take me two minutes to find my lipstick. I’m convinced, Space, that the reason women take so long in the bathroom is because they take their purses with them. That many T-DIs in one place, and time gets skewed.

So there, that’s my two cents on purses. Well, one cent. I’m still hunting for the other cent in the bottom of my purse.

Okay. Wow. You do, indeed fit a bunch of important stuff in there. And, whether you call yourself a chick, a woman, a girl, a broad – whatever – I do have to say that sure is a cute purse. Just adorable. Very colorful! Anyway, trying to understand a lot of the physical properties of her purses just befuddles me. Why is it that I can watch her drop the camera in there, and I can dive across the truck in the same instant, shoving my arms in there, but the camera is nowhere to be found? It’s impossibly ridiculous. You know, I have seen her stick a baseball bat into her makeup satchel? The outside dimensions of this thing are like six inches squared. And she stuck our boy’s baseball bat in there one day because she had nowhere else to put it.

Yeah I’m running out of funny shit to say about purses. I really just wanted to write this to tell you that she can keep so much shit in her purse it’s like clowns coming out of a car. The space inside is physically defiant to reality. But that was really about it. So I had to come up with a bunch of filler for a good column – not saying this one was good – but – you know what? I’m just gonna end it here. And there’s your closing paragraph.