We all know I was the one who introduced the world to the idea that we could solve the global warming crisis with National Leave Your Refrigerator Open Today day. So, clearly, I’m a pretty smart guy. Apparently, no one has taken this idea and run with it, but that doesn’t really mean the idea isn’t genius. You know? I think the government is trying to get rid of me so that they can claim the idea for themselves, then we’ll start seeing the idea put into practice. But I just wanted to bring that up – not to rub it in your face that I’m a lot smarter than you, but rather just to remind you that I am, in fact, pretty smart.

So anyway, as I always do, I was sitting around yesterday thinking of more ways I could change the world and make it better for people. Like when I came up with the idea of how to run cars on water… Well, they won’t start using that until we run out of gas. Because you’d put all the gas station employees out of a job. See? But just like that, I came up with a few more ideas that will really help the world become a better place. And I’d like to tell you about a couple of these ideas. You can tell me how awesome they are and how smart I am in the comments section below, because I know you’re going to get your socks blown off.

Okay, so the first one is this: you know how when you’re driving sometimes, you run over a damn nail and it pops your damn tire, and you crash your damn truck into the damn concrete wall and your damn airbags deploy? 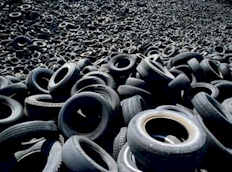 All because of a damn nail? Yeah. Tires pop every day because of nails. That’s problem number one. And problem B is this: when you drive on tires long enough, they finally start wearing down. The rubber slowly but surely gets left on the pavement until they’re finally just kind of gone. And then they pop. So both problems end up resulting in the same damn end: they pop. Basically what I’m saying here is that tires pop. Either from punctures or from wearing out. Really? This is the twentieth century, people. Shouldn’t we have better technology than this?

Well here it is, folks. You read it here first. Ready? Okay! That sounded like something a cheerleader would say. But here it is: start making tires out of steel. Uh, yeah, you know, nails and screws won’t puncture through steel. Duh! Good lord, people, why hasn’t anyone thought of this yet? I do realize that once you bought one set, you’d never have to buy another set again, and slowly but surely, the tire companies might start having to lay-off their employees. But really, this is for the betterment of mankind. Seriously. Have you tried to pound a nail through a piece of steel? Yeah. That’s what I thought.

Secondly, you think a tire made of steel is going to pop? Yeah. No. Because you know why? Well, because it’s NOT FILLED WITH AIR! Duh! Good grief, this is so simple. Steel tires won’t pop, won’t wear out, and will never ever pop. I know. It’s entirely genius, but no one is willing to stand up and put it into action because it’s so ground breaking. Wait. Yeah, maybe that’s why they haven’t is because it might literally break some pavement. But I guess you could redo all the roads with steel too. Well, whatever, we can figure that part out later.

And here’s another thing that will really help change the world and make people’s lives better. Now this one is revolutionary. But it would work. See, let’s talk about crime. How much money does the government spend every year fighting crime? I don’t know the exact figure, but I know it’s got to be in the billions of dollars. You know why there’s crime? Let me ask you another way. You know why people steal other people’s stuff? Because they can’t afford their own! No one has any money! The housing market has gone to schlit, the economy sucks right now, and no one has the money to pay for their bills! So the government is losing money having to pay for mortgage company bail-outs and stuff, right? Well, listen to my solution.

There are around 250 million people in the United States. Probably a few thousand of them are kids. So let’s say there’s 240 million people in the United States. If the government spends billions of dollars a year fixing the economy and bailing people out, how about just spending millions to fix it once and for all? Uh huh. See, you give every US American a million bucks. That only costs the government 240 million bucks or so. Not billions. Then everyone can:

And then, therefore, the problem is solved. Just like that. Crime goes away, stress goes away, late payments go away. Everyone is happy. And everyone is rich. Seriously, how could that go wrong? Good grief, why hasn’t anyone caught onto this yet? Well, I’ve gone ahead and sent my phone number to the congressman for my state, so he can feel free to call me if he has any questions. I’m sure there will be some paperwork and stuff to get sorted out, but I expect he’ll probably call within the week. Because this is good stuff. And I’m not even going to charge them for the idea.

I also have a backup plan if they don’t like that one. If they have a little trouble shelling out 240 million bucks, they can do my Plan B, which is to give everyone 500 thousand bucks. That’s half a million. Well, that would only cost the government 120 million bucks. Seriously? That’s just really not that much money when you’re talking about the United States government. And admit it: who couldn’t use 500 grand? I know it would pay off all my bills. Well, most of them, anyway. I could even probably buy a new Jeep.

So I know you’re all excited and just dizzy with your mind being blown away, but give this a few weeks, people. Stuff will start changing. And meanwhile, I’ll still be coming up with new ideas. It just keeps getting better and better. Heck yes, people. Remember. You read it here first.

In God We Trust