After several years of deliberating and delaying and any other excuses I could find to put it off, I’ve finally finished building my HTPC. To you lay folk out there, that stands for Home Theater Personal Computer. And let me tell you: you need to get yourself one of these bad boys.

Anyway, the point is that since I have finally finished it out, my red-haired wife and I have been watching a lot more movies. And she’s even stayed awake for a few of them. I know, I know, most of what I write on this site is fictitious, but trust me, this is true! And last night she stayed awake through the entire viewing of The Time Traveler’s Wife.

Let me tell you about this movie. They classify it under drama and romance, but I have to admit something to you, my good close personal friends: I actually laughed out loud several times. You know I’m pretty hip on time travel. Time travel is my favorite sub-genre when it comes to reading sci-fi. Hey, shoot, even my first book that I wrote had a little time travel in it. Remember, Flavio said my first book was a Time Travel Romance? Yeah. 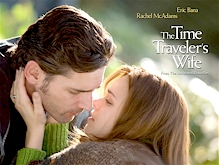 Anyway, I love me some time travel films. And this isn’t like some dude comes from the future and does something cool then goes back to the future whence he came. He doesn’t go back into the 1500s and enter a jousting tournament. He doesn’t travel to the year 6434 and watch the moon crash into the earth. In fact, once it all unwinds, you come to find out that the only times he visits are periods during his wife’s life. Which is why she is the subject of the title.

So without spoiling it for you, I’ll just say it’s about a guy who – due to a genetic mutation – hops all around in the temporal bounce house, so to speak. He can’t control it either. He’ll be hanging out somewhere and just ‘whoop!’ disappear. His clothes fall to the floor, and he appears in another time – pretty close to the time he left, within a decade or two – naked. So his clothes don’t go with him when he spontaneously pops out of existence. This, no doubt, causes some problems for him socially.

Every time he reappears somewhere he has to do two things: number one, he has to find out where the hell he is, and two, he has to find clothing. Throughout the years, he has resorted to breaking and entering, mugging people for their clothes, and all other types of ill schlit. So he can avoid being arrested for indecent exposure.

There were several scenes in the movie where I laughed out loud, like I said. He disappears at some of the most inopportune times. There’s a scene in the movie where it shows like six or seven of his vanishings right in a row, and the problems it causes. Like once when he passes his wife on the way out of the kitchen. She’s heading back to the kitchen to get something and he’s carrying plates back to table. They smile at each other as they pass, then you hear the plates crash on the floor. The plates he had been carrying, that is. Yeah. Just gone. They did a great job of touching on the humor that could abound were this to be a part of someone’s lifestyle.

Anyway, enough about the film. Let’s talk about the review. I think I’m going to give it four stars, out of a possible five. That’s a ten-point system just like my book rating system. Number one, the subject matter is very attractive to me. And while they didn’t really concentrate on the high-tech awesome sciencey goodness of time travel, that was the central plot device that affected the characters.

Secondly, the characters were easy to look at. I’m not just talking about how attractive little miss Rachel McAdams is. Yeah, she’s finer than split fishing line. And Eric Bana is a hunk himself. No, I’m talking about how easy it is to watch them be these characters. Rachel and Eric disappeared on the screen, and all I saw was Clare and Henry.

These two portrayed the characters flawlessly. They’ve accepted that he has this condition, they don’t fight it, they don’t get surprised by it and they don’t really try to explain it. We meet the characters after they’ve resigned themselves to this ridiculous fate, and they’re okay with it.

Eric Bana’s face is one of those that always looks like he’s about to smirk, and that made him perfect for the role. Like when he appears somewhere in the middle of an alley, naked as the day he was born, his face just says it all. He didn’t need to say, “Oh, shit. What now?” because the look on his face said exactly that. And Rachel’s sweet smile was one of maybe a little frustration but also of acceptance. She knew what she was getting into when she married him. Now she’s got a mess to clean up on the floor. And so it is.

Let’s not overlook the kickassery of Ron Livingston, either, who played Gomez in this picture. He’s fun to have around.

Overall, this was a great, fun film. Storyline, I’ll give 4.5 stars. Why not? I’ve read a hundred time-travel stories, but this was unique. This focused on the pain-in-the-ass time travel would create as a condition. It was hilarious in parts, and sad in others. Story-telling, I’ll give four stars because when you take a difficult storyline like that, and especially one that involves time travel, you’re gonna have your work cut out for you, keeping up with all the paradoxes and all. Meeting yourself, talking people into believing your story, et cetera. They did a fine job.

And finally, acting. Acting in movies is like writing in books. The author’s control of the grammar and the rules of English, I liken to the actor’s ability to convey the believability of that character’s story. If they can’t act worth a damn, it’s like a writer who misuses their, there and they’re. Well, I didn’t have any trouble with any acting here. They were all good, and all seemed like seasoned actors. None of them detracted from the story at all. Good job, guys. You get four stars there. Crying on screen and bringing me to tears would get you an extra half-star there. There was none of that here, so four is about as good as you can expect to get.

Bottom line, yeah, I’d say I’m probably going to watch this one again here in the next few weeks. I’ll probably show it to my Pop or something. It’s worth seeing again. Go rent it and get yourself some popcorn (or copporn) and cuddle on the couch with your lover. You’ll enjoy this one, friends.

The Fear of a Not-So-Scary Movie

So this is April?