Here we are, Two-Step and a couple of friends and I moseyed out to Alpine, Texas to see the stars. They say Alpine is the best place in the continental United States to see the stars. And boy, they’re right. Zero light pollution. No street lights, no bright signage, just perfect darkness and a hundred billion stars in the sky.

Our first night we stayed in Brownswood at a budget inn type place, just to knock a few hours off the nine-hour trek to Alpine. That was a good experience in itself though, as we all sat outside around a wire-mesh table and had some drinks while we talked to some other travelers who had just arrived on their motorcycle. It seems that everyone you meet at a hotel is always so friendly. It almost restores your faith in humanity a little bit. Everyone we’ve met so far has been great.

Then yesterday morning we finished our trip, stopping in some tiny town for a Mexican food lunch. Alpine is beautiful. And the place we’re staying, the Maverick Inn, is unlike any place I’ve ever stayed. The rooms are all little cottages with rustic furniture and nice beds and ceramic tile floors. And there’s absolutely no “hotel smell” about them at all. Courtyard and swimming pool and deck with grills with music pouring forth from the speakers… It’s very relaxing. We love it here. 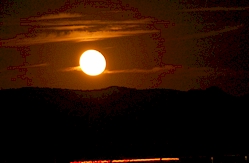 Last night we made the short jog over to Fort Davis, where the observatory is. It’s about a thirty-minute jog up some really curvy mountain roads, which is a lot of fun to drive. The observatory is a picture itself. Sitting on a hill, you see a series of dome telescopes, and it almost sends chills down your spine, as you anticipate what’s in store. We attended the Saturday-night Star Party. Everyone files into an amphitheater where a guide points out constellations and interesting stars with a high-powered green laser pointer. You learn how to find certain stars of interest, and he tells you what you’ll be looking at through the telescopes a little later in the evening.

As you sit there listening, it slowly grows darker, and more and more stars appear in the sky, until it finally just overwhelms you. A hundred billion trillion tiny specks of light awash with the dusty band of the Milky Way. It was a perfect night, too, as there wasn’t a single cloud in the sky. All the clouds of the day had peacefully stepped back and bowed out of the way. The moon, being in full state, made a grand appearance, rising over the mountains in the distance. It was glorious. Of course, once it had begun its long trek across the sky, it washed the sky with light, hiding a lot of the stars, but it will still majestic and gorgeous, and we got some really cool pictures.

After the amphitheater, everyone lines up in a series of lines behind a series of reflectors and telescopes where we looked at such things as Saturn, M-11, M-57 and Albireo – a binary star system. Some of these are very dense clusters of stars – up to a million stars in one cluster – that just look like a tiny speck of light in the sky until see at great magnification. It was breathtaking. But they also showed us a cluster of new stars that can be found rather easily in the sky, and seen with a simple pair of binoculars. That was the coolest thing of the night for me. Because though the clusters and the magic of seeing Albireo were phenomenal, just knowing that I can always look at this little cluster with my own binoculars is super exciting. I had my binoculars with me, and kept stopping to look at them every few minutes.

I was also able to get some fantastic pictures of the moon, holding my camera up to the eyepiece of a telescope. The peace and wonder we all felt at looking at all these celestial wonders was unparalleled. It was sobering. Humbling. We will definitely be planning another trip soon – when the moon is in its new phase, so we can see a lot more, for a lot longer. I would love to have laid a blanket out on the hill and just lain there looking up at the Milky Way for a few hours. Absolutely stunning.

Tonight, it’s out to Marfa – about twenty minutes away – to see the Marfa Lights. These are ghost lights that dance on the horizon. They have a Marfa Lights Viewing Area, where one can sit in his folding chair and drink beer and just watch them. It’s a concrete plot with a nice public restroom facility and a cool area to sit. We’ll sit there with our beer cooler between us and our huge box of beef jerky. We made a giant batch (somewhere around six pounds) of jerky for this road trip. And it’s been awesome. Really, who doesn’t think beef jerky is the best road trip snack? Especially home-made. So tonight, home-made beer and home-made jerky. What could be better.

After watching the lights for a while tonight, and also sneaking glances up at the sky occasionally, I’m sure, we’ll come on back to the Maverick and catch one more night before heading out in the morning to find our way home. We do plan on stopping a few places on the way home to make the trip less taxing. There are plenty of nice areas to stop and look at antiques and whatnot. Then it will be back to the grind. This has been a remarkably rewarding trip. It’s definitely on our list of favorite vacation spots.

Come check out the photo album of the trip.

The History of Beer

The Importance of Good Grammar

This column is 959 words long.