I ride the train to and from work on most days. Well, I should say public transit. Because part of my trip sometimes involves a bus. In the past I would have thought that only poor and homeless people used the DART buses around here. Boy was I wrong. A couple of guys from my work ride with me, and this one really classy, foxy woman rides our bus too. She’s always reading on her phone. These aren’t the only non-homeless people on the bus. Just the ones I care about. But it has nothing to do with being poor. It’s actually to do with being smart, and wanting to free up your hands to use your time the way you want. I get to ride and read instead of drive and cuss. Anyhow, I don’t think I’ve actually ever seen a homeless person on the bus. Now the train, on the other hand…

But I do ride the bus for part of the trip because it gets me closer to my building. I have a nice little walk up the hill when I get off the bus. But taking the bus (and the train for that matter) every day makes for some interesting encounters with humanity. And since I’ve now been riding for about seven months, I’ve seen some very interesting people. Let me tell you about some of the most interesting encounters:

Ready to Relax: On the bus the other morning, there was a large black woman in one of the front, side-facing seats. I guess she was getting uncomfortable, so she decided she needed to remove her bra. Now under normal circumstances, I don’t have a problem with this. Well, I didn’t here either. Except that… Well, just… Okay she ended up having to pull her shirt up over her big belly because her bra got caught. So I saw that giant swell of her belly and the undersides of her massive milk jugs before she finally got situated. She then proceeded to fold the bra up and stuff it into a McDonald’s bag.

Food Begets Fat: Speaking of McDonald’s, I sat across from a woman the other day on the train who must have weighed as much as four of me. And she was munching down on burgers and fries with wretchless abandon. Actually, I was able to take her picture. 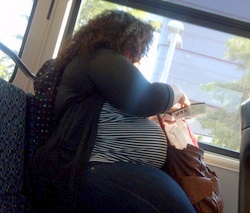 I noticed in passing that her thigh was larger than my midsection. And I’m not a tiny guy. I have three feet of waist here, and could not have wrapped my belt around her upper thigh. See picture for proof.

The biggest problem I had with this was not the fact that she gained four pounds on this train ride alone. That’s her problem. Someone that large who still thinks McDonald’s is a healthy food choice – hey, that’s a happy eater. I’ve got nothing to say to her. No, my problem, rather, was how loudly she was eating. I could hear her over the noise of the train. Munching and slurping and making grunting noises as she shoved large bites of processed horse-face-meat into her face.

Have Sag, Must Walk: Another great experience was when a skinny black dude got on wearing black shorts, but they were sagging so low you couldn’t see his socks. They looked like jeans. Do these people not realize this makes you look like you have tiny legs? His shirt was so long it covered the gap, and it literally looked like his legs were eighteen inches long. He looked absolutely ridiculous. But yeah, guys. Sagging is cool. Great fashion statement there. You guys look really swass.

Anyway, he thought he was the cat’s ass and the bee’s knees. He was listening to his shitty music at full volume from his phone speaker, pressed right up against his ear. No ear buds, just tinny little speaker. And thinking he was cooler than the other side of your pillow. I took great pleasure in watching him get ejected for not having a ticket. And the DART police who kicked him off told him to turn down his music. And to pull up his draws. That’s how she said it. She said, “And pull up yo draws; you look like a fool.”

The Lost Boys: One that I thought was cute was when a group of young teens got on at St Paul station, in downtown Dallas. They rode all the way to Frankford station talking to me. They asked me what I did, how long I’d been riding the train, what I was reading… Just conversation. Not sure why they felt the need to talk to me instead of letting me read. But when we finally approached Frankford Station and the announcement blared, “This train is out of service,” they looked around dejectedly. What? I asked where they were going. They said Fair Park. I said, “Yeah, you’re going to want to get back on the southbound train.” They took the train all the way north. And should have gone like three stops south. This cost them about two hours. But we had good talk!

I Left You A Gift:There’s an old woman who rides the bus sometimes. And I’m not sure why. She gets on in front of the Safeway, and gets off like two blocks down in front of an apartment. Well, she uses a walker. So maybe it’s not a comfortable distance. Anyway, it takes the bus driver like five minutes to park, drop the

platform and raise her up before she can get on, and another five to let her off. It’s a major time-waster. Anyway, she sat in the seat in front of me once, and promptly proceeded to shit herself. She was grumbling, “Ah no, dammit to all mercy I’ve did it again. Cock bag mother tree huggin’ sponge bitch!” or some such. Literally, it was like a string of random, near-vulgar words strung together in a non-sequitur that made me giggle. Then I realized why she was “cursing”. When she got up, the entire backside of her flowery blue dressed was soiled completely through, like she’d had an oil spill. And it was caked down her legs like so much trouser chili. The smell was absolutely horrific. I had to move to the back of the bus. That seat is forever ruined.

The Generous Bum: I rode all the way from St Paul to Frankford one day, sitting in a seat next to a tall, slender black man wearing a narrow tie and a painter’s cap. He looked like he was really dressed up in his best. He was a cool looking dude, just trying to get home from a meeting or work or something. Not sure, since I’ve never seen him since. Anyway, he bought a day pass ticket for the DART rail and at the end of the trip, turned to me and said, “Well, I won’t be needin’ this no more, so maybe you can use it.” He handed me his day pass and smiled, then got off the train. I said, “Hey thanks, man!” and tried to sound genuinely excited. I didn’t want to ruin his high. But uh, dude, we just made the evening trip home. Unless I plan to go back to downtown Dallas tonight, I can’t use your ticket. I have an annual regional pass anyway. Don’t need it. So I gave it to a woman outside the train who was running up with a small boy in tow. She was able to use it. 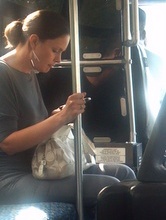 Well I think that’s about it. Well, those are at least the best ones. The ones that stick out in my memory. New experiences happen several times a week. The red-headed biker chick who’s nerdier than a Harry Potter fan. The wheelchair man who stubs his cigarette out on his way into the train and always blows the smoke out once he’s inside. The Hispanic woman who doesn’t own a bra… See, these are interesting people – they just haven’t really done anything interesting yet. But I know they will. Inset in this paragraph is the classy, foxy lady who sits near us on the bus.

Riding the train has been a great experience for me, even when it doesn’t yield anecdotes. And it’s a great time to unwind, sit back and let someone else do the driving, and just read. Sometimes I take a little nap. Sometimes I just veg out and stare out the window. Sometimes I people-watch. But usually I just read. It’s great for that. If I’m not reading a story, there’s bound to be someone making one.