You know, there are a lot of things in life that get under my skin. So I won’t start this paragraph by telling you there’s nothing that pisses me off more than this one thing. But it does bother me a frightening lot. I mean, most people would think I was being petty and oafish if I complained about it publicly. So I’ll just do it here privately on this here little forum, you see?

So moving along, there are, as I said, many things that bother me. And this is just one of them. I absolutely cannot stand that everywhere you go, Science Fiction and Fantasy are grouped together. Petty? Inane? Shrug. Maybe so. But it really bothers me. Because some people like one or the other, and not both. I, for one, love some science fiction. I like some space opera, which it seems most of the sci-fi genre has moved to, but I really like pretty much anything fictional that involves sciency stuff.

I don’t, on the other hand, like fantasy. Magic wands and flying brooms and dragons dropping through ceilings, and having to take magical golden rings back to places just doesn’t interest me at all. Not in the least. I’ve been quoted as saying, “You show me a dragon, and I’ll show you someone who can snap a book closed, slide it across the table and tell the barrista to ‘make this disappear’ faster than you can say ‘bored of the rings’.” Or something to that effect. In short, I don’t mind long adventures, but once they start involving magic wands and wizards and all that other horse shit, I quickly get a bad taste in my mouth, and start looking for the nearest teen nerd to punch. Because they create the market for that equine fecal matter.

“Why, then, Space, did you enjoy Wizard and Glass (the fourth installment of the Dark Tower series by Stephen King) so much?” Aha! You trapped me, didn’t you? This was Stephen King’s adventure / fantasy series that captured the hearts of the American people for many years. Including this one. (This year, not this heart.) And this book was the best of the series. Even though it included a witch who put curses on people, and looked in a crystal ball. Not one of those fake Pee-Wee Herman ones with the switched cord on the side that glows and crap. This was a real-life working, actual crystal ball. And indeed, there may have been a little magic in there. But there were no dragons.

Well, I say, no, I’m not afraid to admit that I liked that book. It was insanely awesome. First of all, there was a standoff. Okay, wait. No, I’m not going to review the book here. You can run on over to Goodreads and check out my review there. You’re back? What’d you think? Yeah. I thought so too. So I won’t run down all the reasons I liked the book. It was just great. But yes, it was a fantasy book. Let’s… Look, let’s just not go there. There were no dragons. We’ll leave it at that. 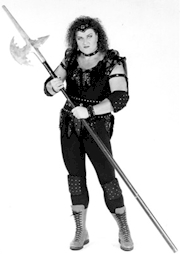 Thirdly, not all people who like science fiction actually like fantasy. Oh, did I already say that? Yeah. Okay. Well, when I’m walking through Half-Price Books, I always stroll down the SF/F aisle thinking I might find another something cool to leave on the train, but I always get so beat down after the first few titles that I always storm out of the aisle in a huff. Seriously. It angers me! Why should I have to look through some shit genre I hate mixed in with the genre I love? Put myself in your shoes. If you had to look through True Crime to find your Harlequin Romance, would you be happy about it? It’s just bad form.

But why, then, has it become ubiquitous? Everywhere you go. Half.com. Amazon. Half-Price. Borders. Audible. Everywhere they sell books, they mix them together. WHY? They are entirely separate entities! Think about it! One uses advanced technology and science to move the plot along. Another uses magic wands and dragons! There are no similarities! One is usually about space ships fighting aliens, and the other is usually about people trekking across thousands of miles of deserts to put two swords together. Or to return a ring to some dude. I can’t think of any sensible reason to combine those two genres. And it angers me.

So what did I decide to do about it? Well, I researched. This meant spending four or five minutes on Google, typing “why are science fiction fantasy always mixed together breasts”. I like to throw the word breasts in there by accident so I accidentally get a couple of hot images back in my search results. But Googling this didn’t really yield any results. The bottom line is that no one really knows. Well, I’m tired of it. I hate finding a nice looking spine in the SF/F section, and pulling it out only to see a scantilly-clad woman on the front wearing an armored bra and panties with a battle axe in her hand. Seriously. People read that garbage?

The only thing I really could do, when it came down to it (not sure what ‘it’ represents in either case there), was to get on here and rant about it. So that’s what I’m doing. I’m yelling at the world, “Stop Mixing Science Fiction and Fantasy Together Where Books Are Sold!” Well, I probably shouldn’t have capitalized ‘are’. But you get the drift.

I Hate Websites That Suck

This column is 932 words long.