Part One: Man Versus Murphy

As our tour guide for the Panama Canal said, “Murphy isn’t just a part of our daily lives here in Panama, but he was also born here.” He spoke of Edward Murphy, the Panamanian native who coined the phrase we all know today as Murphy’s Law. Well, we met Mr. Murphy before we even got to the airport.

State Highway 121, which is perpetually in a state of construction, almost caused us to miss our flight. They had blocked the exit to the airport. I don’t know who ‘they’ is, but I’d sure like to have a little chat with them. Yes, they blocked the exit. How can they do that when there are literally thousands of people every day who depend on that exit to get to the airport? Well, you’ll have to ask ‘them’.

Anyway, we made the airport, and it ended up being a non-issue, as we got there around 5:45 in the morning, and our flight didn’t leave until seven-thirty. It felt a little awkward being told they couldn’t serve us drinks yet because the bar didn’t open until seven. Who drinks before seven? Well, we wanted a Bloody Mary to start our trip off with a bang. Alas, we had to wait until we were at cruising altitude on the way to Panama City. The one in Panama, that is. Not Florida.

Well, the nice man onboard gave us three mini-bottles of vodka for the price of one, and a couple of extra cans of Mary Mix. Suffice it to say we were well set up by the time we arrived in Panama. There were only a few other people from our group at the resort already. We had taken the earliest flight available. The rest of the gang would show up around ten o’clock that first night – a Saturday. We were well into our vacation by then, if you know what I mean.

So when Suzanne, a sales rep I have never personally met but have spoken to many times on the phone showed up, I was happily ready to meet her. I approached her and her family impersonating a drunk street bum (for which I probably looked the part) and asked her loudly if I could borrow ten dollars. Her poor children were standing there frightened, though I turned and gave them a wink. Apparently she had just been telling them to be on the lookout for bums asking for handouts. When she finally figured out who I was – just before she hit me with her purse, but not before I embarrassed her poor husband and children in front of the rest of the line – it was probably too late to spare a bad first impression. Oh well. We were in Panama.

My red-haired wife is the manager of an inside sales department, and we work for the same company. She exceeded her annual goal of 100% by a pretty good margin, and was awarded with what our company calls the President’s Club. The top two performers on every sales team won an all-expenses-paid trip to Panama for a week. Well, I just happen to be my wife’s husband, so I got to go too. There might have been a little envy among my teammates, but hey – they should have married a sales rep, am I right?

The country of Panama is right on that little sideways bit of land right between North and South America. The Panama Canal, therefore, runs north and south. Well, northwest to southeast. So Panama City, where we stayed, was on the south side of the isthmus. It looked out over the Pacific. 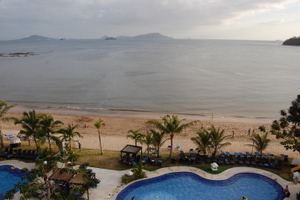 Had we stayed on the Caribbean side, we’d have had gorgeous crystal-clear-blue waters. As it were, we spent exactly no time on the beach. I call it Diesel Beach. Not very creative, but there we are. The waters and sand there are all dark and dirty, and smell like fuel because of the run-off of diesel from the Panama Canal.

The company took us on a tour of the Canal on our second day, and I was sufficiently impressed, to say the least. It’s just not something I ever really think about. How does it work? How long does it take for ships to traverse it? Why is it there? Well, that’s probably the only question to which I knew the answer going in. But our tour guide on the yacht, Rey, made sure we knew everything there was to know about the Canal. And what it’s for. And when it was built. And how deep it is. And how much it costs to use. And how many people use it. And their names. And blood types. And mothers’ maiden names. You get my drift. We finally had to make our way to the top deck of the yacht in order to avoid being overwhelmed with PCT. Oh, that’s Panama Canal Trivia.

The Canal itself is very interesting though. Eighty-five feet above sea-level, there are several locks they use to raise and lower the ships for the journey. It can take as much as eight to ten days to cross it. And there are several interesting factors I’d never have guessed had I not taken this tour. Well, like I said, I was sufficiently impressed. There are a couple of lakes that feed the canal its fresh water to keep it full. These lakes depend on the rainy season to stay full so they can keep the Canal open for business. And every time they drain the locks, e.g. let a ship through the Canal, they lose fifty-two million gallons of freshwater into the sea. And typically there are thirty-five to forty ships making that voyage every day.

The Canal is in operation twenty-four hours a day, and it costs a great deal to go through it. Another something I’d never have considered is that each of these ships must make an appointment – usually months 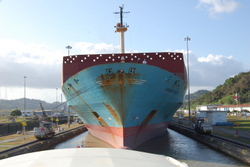 in advance – and have the payment bank-transferred to the PC Authority twenty-four hours before they are cleared to cross. No checks, no credit cards. Bank transfers only. And it’s not cheap. A tourist cruiseliner can cost upwards of $25,000. Some of the large freight ships cost up to $400,000. Apparently though, most of the profits go back into the country, and to fund the operation of the Canal.

One of the coolest features of it – for me, anyway, the always technophile – is the system they use to keep the ships from hitting the edges of the locks. These locks are 160 feet wide, and some of the ships that come through – like the one that came right behind our yacht – are 156 feet. Literally two feet of clearance on each side of the ship. And when you see something that massive running through the lock, it looks pretty obvious that a wreck could be incredibly destructive.

Therefore, there are train tracks that run all the way along both sides of the lock. On it run these little train engines that pull cables around the ships. So each ship has four to six of these train cars running alongside it – the same number on each side – that keep the cables tight, and keep the ship from hitting the side. And apparently the Canal Authority only has one-way radio communication with the trains. I didn’t quite understand that part, but that’s what Rey said. Oh, Rey, how you mock me now.

Rey is the one who told us about Murphy though, and how our tour through the Canal had been delayed because of Murphy’s Law. Well, he was made to look pretty intelligent when we finished our long day in the sun by approaching the only dock back onto land and finding it occupied. Apparently another vessel had broken down in the only dock that could get us back on land. How it’s possible to have a hundred yachts, sailboats and other large vessels lying in wait outside the Canal with only one land dock is way beyond me. Maybe Rey knows. 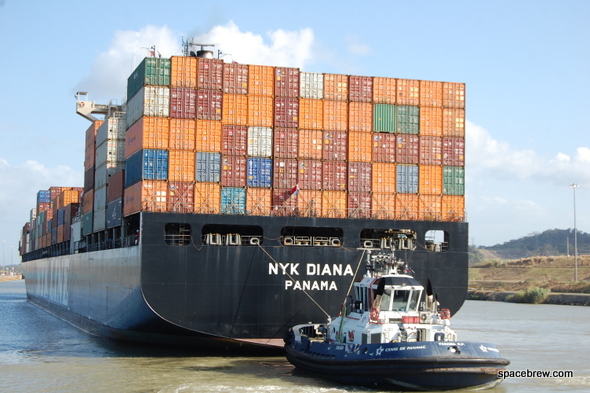 So we had to sit and wait for an hour. And the sun went away. And the breeze picked up. The girls got cold and started borrowing the men’s shirts. Their answer was to finally bring a smaller, twenty-man vessel up alongside our hundred-man yacht to pull us off a few at a time and take us to shore. Instantly, I ordered another beer and went up top to wait. It was either wait on the yacht and be the last one to shore (free drinks), or go first and sit on the tour bus and wait for the others (no drinks). Clearly I’m smarter than everyone else, because this was my own brilliant idea.

Once we finally got to shore, I was instantly jealous to find Shana and Jeremy and Suzanne and Tom all had beers in their hands. Because they had been the first to shore, and had stopped into a little local outside bar to top off. And we had run out of beer on the yacht. Out. So yes, I had stood up there waiting to go last, and having no beer at all to drink. Remember that beer I said I ordered? Well it never actually came. Sometimes I’m not as smart as I think I am. 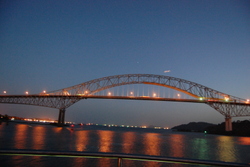 It was a great experience though, and traversing the Panama Canal has given me another attractive research project to endeavor upon. I plan to take the mystery out of the Canal. How does the water flow in? What if the lake runs dry? How are those large gates so watertight? How much horsepower does it take to swing them open against the flow of millions of gallons of water? How heavy are those little train engines, and has a ship ever jerked one of them into the Canal? All of these questions have answers. And I shall find them all. Several of our friends are expecting a full report on such things as soon as I can produce them. But I first must finish my journal of the vacation. There is so much to cover. So many memories in jeopardy of being forever forgotten in the vast emptiness that is my catalog of events. If I don’t journal and photograph, I’m likely not to remember I’ve even been there.

So read with me. Over the next few days I’ll be recounting the events as they happened, in as much vivid and explicit detail as I can recall. I will include pictures where appropriate, and try to relay to you the experience first-hand. There were so many rich, rewarding experiences on this trip, I would hate not to share them all. Thanks for reading. Tomorrow we see the rain forest.