Have you ever paid attention to your phone bill? Do you know that they actually still send you a list of all the phone calls you made and received during the billing cycle? Why do they do that? I mean, sure, I think the log should be available if we need it, but really? Who the hell actually looks at every call every month? Does anyone keep a record of it on a notepad or something and then check it like a bank statement, making sure he didn’t get billed for a call he didn’t make?

Another thing you might not have noticed on your bill – for those of you with smartphones – is the fact that they charge you thirty dollars a month for a data plan. Well, I know some charge more, some charge less. But the median is somewhere right around thirty bucks. Well, I know you know you get charged that every month, because when you signed up for the service and got the smartphone you agreed that you had to have a plan on it to be able to use it. But have you really sat back and thought about what this really means? Of course you haven’t, you silly goose!

And neither have I. For the last four years or so. Until now. Yes. Now, I have. And I really thought about it too. Here’s how that went: I’m paying thirty dollars a month to have a data plan on my phone. That’s three hundred and sixty dollars a year. So for the last four years, I’ve paid almost fifteen-hundred dollars. For data. And here’s the kicker: for data you can get free.

That smartphone you carry around has wifi on it, does it not? So when you get to where you’re going, you hop on the wifi – usually for free. Hell even McDonald’s has free wifi. Or – get this – even Lowe’s. Yes. Lowe’s Home Improvement offers free wifi. And you have wifi in your home, right? So you’re basically paying for data on that smartphone for the time between home and wherever you’re going. And when you’re between those two places, you’re on the road, probably driving, where you shouldn’t be on your damn phone anyway.

So I cut it loose. It’s hard going from a smartphone back to a dumb phone. And it’s not that I can’t afford the plan. It’s just the principle of it. It pisses me off that the phone companies can charge you for that crap. It should be like a SmartPhone Data Fee of five bucks every month or something. That’s fair. But to charge for data you can get for free? That’s criminal. 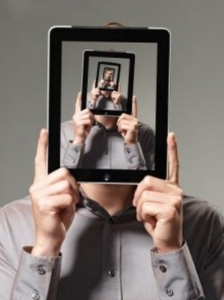 I went back to a slider phone that has a slide-out keyboard on it. This thing will make phone calls and it will text people. The onlyest thing I really miss real bad is the Google Contacts syncing. On my Android device, if I updated a contact in my Gmail on the computer, it was updated on my phone. Here on this phone, I actually have to put in numbers. And not all them are on there yet. So I’m getting calls and being like, “Who dis.”

But the biggest reason I made this move is because I got myself a tablet. An Android tablet that I carry around with me everywhere. It does everything the phone does, except for making calls. And I can use Google Hangouts. Or chat. Or email. Suck it, Verizon. Of course, getting the tablet was a one-time expense, that was less than paying for a data plan for a year. Cheaper than seven months’-worth of data, in fact. Well, buying a tablet for myself also meant I had to get the red-haired wife a gadget. I bought her the Keurig Platinum Coffee Brewing Station. So clearly, it got expensive real fast. And it will now take over a year to amortize off the cost. But STILL. My point is made. And my wife is happy. What’s the point in anything if the wife’s not happy?

So in closing, I’d like to invite you to do the same. Not because I care what you pay for data. But because I hate that we’re allowing phone companies to charge us for free stuff. And you know how I like sticking it to the big guys.