What I didn’t consider when I wrote volume two was that it was Memorial Day. I mean, of course I knew it was Memorial Day. But I hadn’t considered that the breweries would be closed. So in short, what this meant was that we could take our time getting to Portland. There was no need to rush to make sure we had plenty of daylight left to hit as many brewhouses as we could. And you know, that worked out after all, because we were able to have a nice leisurely drive back. What should have taken three hours took almost six. And it was completely cool. 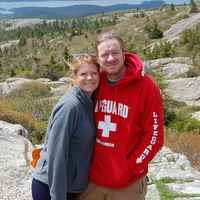 Cadillac Mountain was very nice. Gorgeous views. It was a little cold up there, but we had a great experience. Then we sat at Jordan Pond and had a brunch of popovers and lobster rolls with coffee. One of the most excellent brunch experiences of my life, right there. Completely worth the drive, friends. The wind was cool and fresh off the lake, as we sat outside at a picnic table staring out over the water while we ate. So beautiful.

These popovers are apparently the latest craze up there. The bake a muffin until it gets huge and just sort of explodes. So it’s a gigantic muffin that’s hollow on the inside. You put butter and jam on it, and – well, let me back up. You know those spherical scoops of butter they give you in breakfast diners? Yeah, I took that whole thing, sliced a hole in the pop and stuffed the entire butter sphere in it. Then poured the entire cup of jam inside, and sort of mashed it all around. Dear sweet WOW.

Heading back down to Portland, we drove through Bangor. And you know what you get if you mix Space (me) with Bangor? You get Let’s Go See Stephen King’s House. You guys know how much I respect and admire him. I’ve said before, he doesn’t write the best stories. And he has trouble ending them. But dammit if he doesn’t tell them well. And his latest, 11-22-63? Absolutely masterful. So yes, I hold him in high regard. Perhaps this is why I was a little nervous as we pulled up the street toward West Broadway. I was also anxious with excitement.

We parked a little way down the block and walked up to his house. It’s so unassuming. It’s very pretty – all the homes in that are are, don’t get me wrong. But it doesn’t look like the world’s richest writer lives there. It’s humble. It’s not set on some ten-acre lot, spread far from the neighboring houses. No, he in fact has next-door neighbors. The houses aren’t very close to each other, but it’s not some gated-off community you can’t approach. His house is also not far from the street. It’s a normal distance. The gate to the driveway stood open. I thought briefly what it would cost for me to just stroll up the driveway, cut over and knock on his door. How many people do that? Would it offend? Does he get thousands of people per week doing just that? Well, I respect his privacy too much, so I passed. 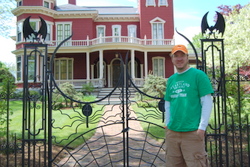 I also considered briefly his walking up the sidewalk and standing next to me as I took a picture of his house. His saying, “You want one with me in it?” because he’s so down-to-earth, he’s totally the type who’d do that. I was saddened by the fact that all his curtains were drawn. Nay, not because I wanted to see inside. But because what that represents is that they never get any privacy otherwise. No fewer than three other cars slowed in front of his house as we were standing there. People stopped and gawked and took pictures and then moved along. Insane.

The coolest part of the trip, though, was through Lisbon Falls. It happens to fall right between Bangor and Portland, on our way. And that was another thing that added to the extended drive. We stopped in Lisbon and checked out the Worumbo Mills, the railroad tracks and the Kennebec Fruit Company. These all appeared prominently in 11-22-63, so it was a very neat experience to get to see them in real life, though they’re closed – or perhaps closed down. Then over the bridge, a couple of pictures of the Falls, and then on to Portland.

We hit a couple of bars in Portland. Steph met her ‘soul sister’ there. Jen and Steph quickly became really close when they learned how much they have in common. Matt and I warmed up to each other too, once we realized they weren’t just gonna chat for a second at the bar, then turn around. Ends up, we really like them, and are probably going to do some more traveling with them in the future. Woot! It’s always good to have travel buddies.

At the Ri-Ra Irish Pub, my red-haired wife talked the singer up on the stage into letting me play a few songs. So I played a few songs on the guitar. Some people clapped. I had a few beers. We got hungry. Went back to the hotel bar, drank a few more beers, had some late dinner, and then crashed.

The drive in from Portland to Boston, was, therefore, very uneventful – and we were ever grateful that we had knocked off that first half of the drive the day before. Another delayed flight and we got back into Dallas around 18:00 last evening. And this was probably Two-Step’s favorite part. Because this is where we drove up to Krum before picking up our children to collect our new billy bumbler. Meet Pirate. 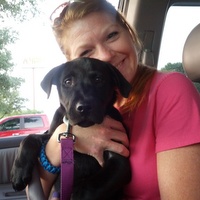 Of course, he’s actually my dog, but it’s cute that she really believes I got it for her for her birthday. So I go along with it. But he’s going to be my brewdog. He’s mostly black lab, and part black something else. Perhaps chow or shepherd. He’s a good looking boy though, so I named him The Dread Pirate Randall Flagg. Of course, we call him Pirate for short. Though it could be conceivable that someone could call him Pirate Flagg. As in title and name. But no one has to say that out loud. It’s my little secret.

With dog in car, we made our way back to life at home. Our children were well tended by our friends Stavi and Hannah. Our house was safely watched, cleaned and taken care of by the same. And it feels a little warmer now with a bumbler running around. Life is much better with a dog. And maybe next time he’ll hang out at the Cottage Street Pub with us.

I Want to Believe

SpaceBrew Review: The Blind Side