We got up at 3:45 yesterday morning. That’s not the impressive part though. We had gone to bed at close to midnight the night before, and then lay mostly awake through those very few hours trying to sleep through the sound of the dog clock in the neighbor’s yard. This dog literally barked once per second for over an hour. A true canus tempus. I wanted to kill him in the face. But we were energized by vacationalistic excitement, and thus were able to get up with no problems. Then I set about to making Bloody Marys for all of the day’s travelers. Well, except for the kids, of course. Duh. They drink whiskey sours.

By 5:15 we were on the shuttle (all seven of us) heading for the airport. At the end of the three-hour flight, the stewardess announced congratulations for Bret and Danae who are getting married on the beach. I know. Copycats, right? They’re even getting married on the same slice of beach as we did nearly four years ago. Major rolleyes. But then the flight attendant had us do the wave. Very nice.

So we arrived with no hitches. So to speak. By half-past-noon, we were pulling up chairs on mom’s beach deck, cracking open some Cold Ones. And an hour later, we were pulling up barstools at Ka’Tiki, drinking fresh Cold Ones from the tap. And it sort of didn’t stop. All day. By 2 am this morning, it felt like we were trying to cram an entire week worth of vacation and drinking into one day. We spent time at the beach, time in front of our rental cottage around the table, time on mom’s deck, time at the tiki bar and time walking – all of which included beers in our hands. And then we hit the karaoke bar where the Ones flowed like sweet red wine. And then one more quick stop by the tiki bar for just one more round. 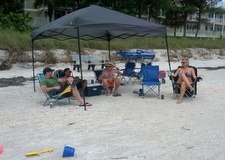 Let me tell you about the karaoke bar though. Storm and I rocked that bitch out. You know she’s got a helluvatuff singing voice anyway. And I’m sort of a singer myself. We were singing harmony while other people were up on stage. It was pretty awesome. We’re going to start gigging back home in the next few months,  just the two of us with a guitar. This has been in the works for some time now, but last night was the first time we actually discovered songs we wanted to sing.  So that was pretty shrimp.

We have one more of our group arriving today, plus about twenty from the wedding family. They will be staying in various hotels though. Our party is all staying spread out between mom’s and our rental cottage. Then tomorrow we have two more coming in – including my daughter from North Carolina, and then Spark will fly in Wednesday. Geez, that’s a lot of trips to the airport.

Day two was a beach day. We set up our chairs by dad’s bench on the beach, early in the morning. Then when we’re finally ready to go out there, our place is reserved. Then we sit under the awning all day, drinking cold beer and eating popcorn, feeding the birds, looking at the beach crowd and getting sunburned. Well, I try not to get sunburned. I never sit in the direct sun. I stay under the shade the entire time I’m out there. I have no interest in a tan or any of that nonsense. Stavi sits under there with me, even though he’s Hispanic. Smart guy. I’ve considered changing his nickname to CC though. Constantly Connected. That boy can’t go anywhere without his phone. He spends more time on Facebook than my red-haired wife spends looking at shoes.

I don’t get internet out here. Well, mom has it. But at our little cottage, we don’t. And the 3G hotspot I brought doesn’t get cell signal. It’s retarded. It’s not that I need to be connected, though. I’d just like to post my columns at the end of each day.

We took a beach trolley down to John’s Pass last night, to get some grub. The first place we went in looked nice. We ordered a round of beers, which promptly came out twenty minutes later, and then the waitress disappeared for another twenty minutes. When she came back she came with attitude. I heard her say to a peer, “I have to take care of these people.” In reading that, it doesn’t look bad. But she said it so snottily, and her attitude as she approached the table told the whole story. So when she asked what I wanted and I told her, and I said I have a nut allergy, she just looked at me dumbly and said, “And?”

Sigh. What does a waitress normally do with that kind of information? “Okay, noted!” or “All right, I’ll let the chef know.” or “Oh, nah, you don’t have to worry about that. There’s no nuts in the kitchen.” Nope. She didn’t handle it like that. So I told her, “And… I wanted to let you know that just in case there are nuts in there, so you don’t effing kill me.” And she got snotty again, so my wife got red-headed on her ass. She said, “You know what? Never mind. Just bring us our check. We don’t need this shit.”

The next restaurant we didn’t even get to sit down because the hostess was a female dog with a capital B. So it was that we ate at The Hut last night and had a great meal. But don’t go to Sculley’s on John’s Pass. It was so late by the time we got done with all this mess that all the shops had closed down. So we’ll have to wait ’til tomorrow to get our pirate getup. You know, for the Pirate Ship cruise. We’re doing it big this year. Yo ho, yo ho! The Pirate’s Right For Me!

Not sure if there will need to be another installment of the 2013 Florida Diaries. Maybe something shrimp will happen. Well, you know it will when Hanna gets here. And there may be something to say about the wedding. But if it does, you know I’ll be back. And I’ll certainly post pictures on Saturday. We’re all getting tattoos Friday, so I imagine that will be worthy of a blog. Until then, stay thirsty, my friends.