I’ve been thinking a lot about tree houses lately. I’m not sure why this is. But Stavi and I have been sitting out on the driveway drinking beer and looking up at my massive trees in my front yard, and it has come to our attention that those are some damn fine tree house trees. I’ve been thinking, therefore, that maybe we should construct a tree house up in one of them there trees.

I’ve long been obsessed with awesome tree houses, and used to try to build them all the time when I was a kid. I was also always jealous of those friends of mine who had really nice ones. My Pop built me a helluvatuff fort when I was a kid. My sister and I had our own two-storey house in the backyard. But it wasn’t a tree house. There’s just a difference. Maybe a tree house can be hidden in the trees. Heck, I even wrote a poem about a tree house when I was younger. Don’t hate.

And then I was watching some program on Animal Planet the other day, and I saw a promo for Tree House Masters. I know, I know, I said I never watch television. Well I don’t. It was just on, so I was looking at it. Anyway, have you heard of Tree House Masters? These guys are literally experts at building tree houses. So they take special orders and go out and build the tree house of people’s dreams. It’s completely awesome. But this particular promo was advertising an episode coming up where they build a brewery up in a tree house. A brewery.

Let me just say that again. A brewery. In a tree house.

This sort of piqued my interest. So I did two things. One, I got really excited. And two, I set to record every episode of that show on my DVR. I had no idea there was a program about something so awesome. Maybe television is worth watching after all. All I’ve known is the crap they air that everyone else watches. My dad watches everything. Mostly politics shows. Kimbre used to be addicted to court TV shows. My daughter is a huge fan of Doc McStuffins. None of that interests me very much. But a show about tree houses? Sign me up please. 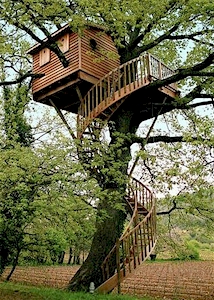 So this episode was completely awesome. They built a tree house with a forty-foot bridge from one tree to another, since the one tree where they built the house was on an incline. They wanted the house 20 feet up in the air, and instead of having to climb 20 feet worth of stairs, they built the stairs on a tree higher up on the hill and thus with a shorter staircase. I guess the theory is that carrying kegs and water and equipment up there would be easier on a shorter one.

Then they build a bar in it. By the end of the episode I was ready to run to Lowe’s and stock up on lumber and get started. But you know what? It was my idea first. Seriously. Remember the Bacon Talk where Haycomet and I discussed Tree Houses? Well if you look a few paragraphs down, you can see where I mention having a bar in the house. Not a brewery, I know, but I did mention a bar.

Of course, when Stavi and I were sitting out there looking at the trees, we also came up with the idea of a bar in a tree house. So this is twice I’ve thought of it. And now that I’ve seen someone do it on television, I have decided I absolutely must make this happen. I simply must have a bar in the top of my trees. How cool would it be for friends to come over and drink up in the trees with you?

The only problem, of course, is getting down if you have a few too many. That’s where the elevator or dumbwaiter comes in handy. But I’m going to start designing this real soon. And hopefully, then I’ll start building it shortly thereafter.

The biggest problem I can see having to face with tree houses is the fact that the trees tend to keep growing. They get taller and wider. So you have to have a system that will allow for the growth of the tree. I think I have something drawn out in my head already. So I’m not worried about that. Then the other problem I think I would face would be keeping children out of it when I’m not up there. Of course they would be allowed up there, but I have to find a way to keep them out when there are no adults up there. Just for safety’s sake.

Being that I live really close to the lake, I think the view would be phenomenal. I would go to the top of my roof and take a photo for you to give you a perspective, but of course the very tree I want to build in would be right in the way. And you don’t need to see a picture of the tree from my roof. The bar, though, would either be out on a deck, or have a window right in front of it where we could sit and stare out at the lake while we drank our Cold Ones.

I would also want to have a kegerator up there, which means running power to the tree house. None of this appears to be a problem. I think the onlyest problem – or at least the biggest – would be getting a full keg up there to put in the fridge. Or would we do it like pirates and pull it up with a rope from the top? Yes! That sounds great. But you know how long it takes to get all the shake-uppedness out of a keg? Well, friends, these are first-world problems, you see. Nothing that scares me away from the idea.

And finally, I know the kids would love it. The bar is just a feature, obviously. I am not building a tree house just for the bar, at least as far as I will admit. But I’ll make it big enough for them to play in too.

So who’s in for a beer at the top of the trees?!

Why I’m So Cynical