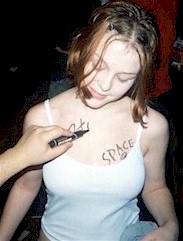 Don’t get me wrong. I am not jealous of women’s ability to do these things without being mocked. I just think that women take strong advantage of it. Most men think it’s incredibly sexy to see two women making out and dancing, etc. I for one, am indifferent about it. I don’t find it to be super appealing, but on the other hand, if I were to be walking down the street and see two women kissing and groping, I would probably look. Hell, I would probably take a picture. But just because two women kiss and grab each other’s boobs, it doesn’t mean they’re gay. If two men did that shit… Why the double standard? Why don’t women find that attractive? Men certainly don’t. Well, most men.

This is just something I was wondering about. The two women making out on the dance floor are the ones everyone starts paying attention to. And most of the men who were looking for women start losing all interest in every other woman in the place. Because they were kissing. Imagine if a dude started french kissing another man, and suddenly, all the bitches wanted those two guys because of it? Why do women get away with a lot more than men? Tell me what you think.

In other news, Storm and I were at a bar the other night and we suddenly found ourselves the most popular men in the bar. No, not because we made out. One of the regulars approached us. Last time we saw her we told her about the website. She went and checked it out, then last night when she saw us again, she told us how impressed she was. I guess she thinks you’re famous if you have a web site. Anyway, she wanted our autographs all over her. I guess the only part of this feat that will actually bring her the glory is that she will be seen by thousands all over the world now with Storm’s and my autograph on her chest. Mission accomplished, Jenny.

Farewell to the Help Desk

The Long Way to Aquaintance

This column is 397 words long.