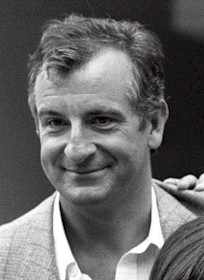 A great light went out this weekend. Douglas Adams died at his home in Santa Barbara on Friday, May 11. He was 49 years young.

Before he died, he sold the movie rights to his books to Disney. He also brought to life his dream, The Guide. A fully functional, omni-operational Guide that can be updated on the fly with entries from people around the world. A wholly remarkable system, which supplants any leather-bound volume anywhere in the world. Click here to check it out.

His legacy will live on in the hearts and minds of all his fans everywhere, and someday, the Guide will be a well known repository for knowledge. He was much more than just an author. He will be greatly missed. So when you go home tonight, or next time you go to the bar, have a drink in remembrance of Douglas Noel Adams. And if at all possible, make it a Pan-Galactic Gargle Blaster.

What happened to baseball?