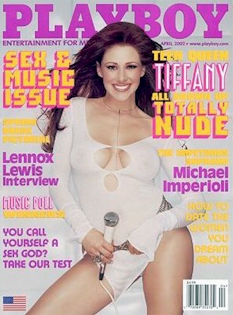 I was sitting at a bar with my cousin and a friend this weekend having some beers, catching up on stuff. Well, we’re kind of regulars there, so we get on pretty well with the bartender. Anyway, she comes up and says, “Remember little Tiffany? The singer?” I was like, “Yeah. Of course. I used to adore her.” She says, “Well check this out,” and flops the magazine down on the bar. Lo and behold, there in front of me are Tiffany’s voluptuous breasts. I was disgusted. I can’t stand looking at women’s breasts, you know? Especially when they are that large and round and soft, and when I used to be infatuated with said person.

But it’s little Tiffany. Remember the pop singer from about 15 years ago (God, has it been that long?) who sang such hits as “I Think We’re Alone Now” and “I Saw Him Standing There”? When I was thirteen I was in love with her. I had Tiffany posters and her album, and many fantasies to boot. She was hotter than the lit end of a cigarette. I even went and saw her in concert, and some band we’d never heard of opened up for her. They were called New Kids on the Block. We saw her at the Six Flags Music Mill Amphitheatre. Oh what a show. And now this. Oh yes, my friends. My day has finally come. (So to speak.)

Whew. She’s married and has a nine-year-old kid now, but that’s okay. Anyway, go grab a copy of the magazine and check her out in her full naked glory. If you liked her before (at least the way she looked) then you should love her now. Especially if you like large beautiful breasts. Way to go, Tiffany! Now I just wish Britney Spears and Nelly Furtado and Shirley Manson and Gwen Stefani and – shall I go on? – would just follow suit.

I don’t really like Playboy that much. It’s not because it’s too tame, so much as because it’s too lame. You can see the airbrush. It looks too perfect and pink and pretty all over, and there’s no humanity left in them. No dimples in the skin, no imperfections that make them humans… It looks like a picture. Most good pictures, like if you go search for amateur porn or something, when you look at them you’re not reminded that it’s a picture, you just see the woman. Well, with Playboy, you’re constantly reminded that you’re looking at a picture. A very edited, airbrushed, photoshopped, fake-ass picture of a naked woman. So in the end it’s too bright and too pink and too pretty. Meh. It does nothing for me.

All that to say this: there are a few exceptions. When my buddy’s ex-girlfriend, Elisa Bridges from Flower Mound, Texas appeared in Playboy, I went to pick up a copy. When Charlize Theron got naked, I bought the Playboy. When Heather Graham, (Oh God I can’t wait) gets naked, I’ll buy a copy. So yeah, when something major big important happens, I’ll pick up a copy. Well friends, this is big major important (big major boobs, too), so I’m out the door and on my way to see history in the spanking.

This column is 540 words long.