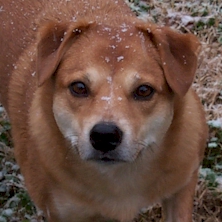 Back in the cry room. I can’t cry in the other room. I have to be by myself. I have to allow myself this grief. But it hurts so damn bad.

I’ve tried the lesser reasoning – “He’s just a dog.” But that doesn’t do anything for me. He was such a big part of my life for the last five years. He was the best dog I’ve ever had; so smart, so sweet, so protective, so entertaining. But tonight he had to go.

I had to take him and have him put down. I told him though, that he wasn’t being punished. “You’re a good dog, Hunter. The best dog ever to have lived. This isn’t your fault.” But it made it no less difficult letting him out of the car for the very last time ever. Letting him run around in the grass, pulling me wherever he wanted to go, letting him sniff as much as his little lungs could handle – all these little last times for things. Then I led him up to the clinic for the last time.

I told him what a good boy he was, and how happy he’d made us. I told him how sorry I was that it had to come to this, but I knew he’d be at peace finally, at last, at long last. He’s hurt for so long. And now I sit here staring at his pictures, remembering how he’d lie beneath my daughter’s crib, protecting her from the evil that might come into our house. I sit here shredded with sadness and dying inside for a dog that changed me so much as to make me forget he was a dog at all. So good he made me think of him as a friend. I’m falling now.

And here I sit writing about it – my only release from the fire that burns in my chest right now.

They had to sedate him just to be able to euthanize him. He was so scared. So scared he’d be deserted, but I didn’t. I stayed with him. I held him. I kissed him. How much more could I do? Who knows. But it will now, never be enough. I have to find a new way to carry on.

I think in waking tomorrow, I’ll realize the finality of what has happened – knowing he’ll never wake up again, and then it will begin to set in. I hate the finality of a dog’s death. It’s not like a friend you know you’ll see again on the other side. I have to suffer these memories as a rite – knowing this is it. I mourn tonight – forgive me. Above is the last picture I ever took of Hunter. Good night, good dog.

Time for a New Orleans