A year or so after I started, I found a fat pair of white socks in my sock drawer – not all together an alarming find – and began to untuck them so I could put them on. And found a bug in my sock. No, not a roach. A bug. An electrical device used for the transmission of audio. Who the hell hides a bug in someone’s sock? Someone who wants to be discovered, that’s who! It was heavy and metal and said “BUG” on the side of it. Not really, but it was about that obvious what it was.

Anyway, skip forward to last night. I had to pick Katy up at the airport. Her flight from Chicago arrived at 19:49, and I pulled up in the parking garage at 19:51. Perfect timing. So I dash inside just as the baggage belts start spitting out fat suitcases packed with souvenirs and dirty clothes. But no Katy. I started looking through the windows into the main terminal, and finally spotted her, lugging two heavy bags over her little shoulders like a diminutive mountain climber. So I jogged up to the security checkpoint and WAHHAHAHH the alarms start wailing. WTF? The guard put his hand up to stop me and starts walking toward me, fiddling with his radio. It was going KCWECCCHHHHH like that. Like it was getting some major interference or something. He said, “Sir, come with me, please,” and pushes open a cute little secret door. No, I ain’t going in there to get probed and interrogated, bitches. I’m just here to get a friend. I was about to object, but he put a finger over his mouth (shhh) and lead me in there. Once we got in there, he wanded me and the damn thing sounded like I was carrying a nuclear reactor when it got around my knees.

So dude jots a note down and shows it to me. It read, “BUG! PULL YOUR PANTS DOWN!” What. You’ve got to be effing kidding me. I’ve owned these corduroys for like five years and have never had a problem. WTF. I stood there staring at him, frowning, for a full ten seconds. He nodded slowly, then underlined the last four words. I shook my head, in disbelief for what I was seeing, then obliged. I dropped my trousers. He squatted down and fished through them, then looked up at me, holding a piece of my pants inside out in his hand. And right there below the knees was sewn in a patch. He pulled out a pocket knife and sliced the threads holding in the patch, then held it up for me to look at. I pulled my pants back up.

He laid the thing on the table and started dissecting it. His radio was turned down, but I could still hear the squelch yelping like a retarded eggplant. As soon as his knife hit the metal inside the patch, it stopped. “See that? You were still transmitting. Someone after you?” Whatever dude. 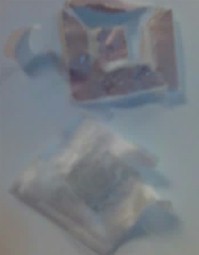 Like I’m a spy or something. Or like I’d even know if there was someone after me. So I started talking to this guy about this “bug”, and – though I started out being very skeptical – I am beginning to believe he might be saying something.

“You sure it’s not just an anti-theft device, chief?” I said. He smirked at me. “Those are just magnetic implements. They don’t transmit radio frequency. This here,” he said, holding it up, “this is a class 2 trasmitter.” Uh huh. Well I used to be in a job where I might have been bugged, but surely all that’s beyond me now. Plus that was five plus years ago. “Well these things can last ten, maybe twelve years.” HOW? What’s powering that thing? I say. He babbles off some technical bullcrap I’ve never heard of, but it sounded reasonable. Anyway, the point was that it really was messing with his radio, and it stopped as soon as he broke the metal. So who the hell wants to know what I’m doing? STOP BUGGING ME!

Yeah, sorry, that was bad. But I am at a loss. Anyway, I know this is a crappy picture – I had to use Flavio’s phone camera. I’ll take a better picture tonight when I get home. Anyone who can tell me what the hell it really is gets a ProseVault t-shirt.

A Sour Taste in my Mouth

An Open Letter to Adobe

This column is 942 words long.