So what do we do now that the world didn’t end when it was supposed to? Well, I imagine a lot of people will be saying the same thing when December 13, 2012 rolls around. They’ll throw up their hands and say, “Uh, what do we do now? Yesterday was supposed to be it!” And what’s funny is I know some actual people who were preparing themselves for the world to end the other day, when they turned on the large collider. It was thought that it would create some black holes, you know. And the scientists said, “Yeah, well it could, but we’ll be able to manage them.”

So you have experience with black holes then? You’ve managed them before? You can somehow keep them from sucking in whatever you’re trying to control them with? Uh huh. Just push it into the trash can? Or wait, do you use another black hole to eat up the one that’s causing problems? How, exactly, tell me please, do you plan to control these black holes that might abound? Well, anyway, I’ve gotten off point. There was a lot of fear that the world would end when they switched this thing on. People were even protesting, trying to get the project shut down so it wouldn’t evaporate our world as we know it. Well they didn’t succeed. The thing is now running. And the world, so far as I know, is still here.

END_OF_DOCUMENT_TOKEN_TO_BE_REPLACED

You all know how badly I want the new iPhone. Well, I have in fact already ordered one and paid for it. Now I wasn’t like some of those fools who went and stood in line for seven days to get one of the first releases of the 3G. I waited a couple of months and then mosied into the AT&T store because I needed a phone. Might as well get the iPhone. It’s been out for a couple of months now, so there shouldn’t be a big wait or anything. So what this should tell you is that I’m a patient guy. When a new electronic device comes out, I don’t rush out and get it right away. I wait until the excitement dies off.

Then I rush out and get one.

END_OF_DOCUMENT_TOKEN_TO_BE_REPLACED

Man this is great. Peligro Pete just got back from Roswell and he brought me a souvenir! I’m liking all this free time he has now since he got canned from the force. Anyway, they spent some time in Roswell watching alien autopsy videos and dodging abductions left and right. Well I haven’t talked to him yet, but I’m almost positive that’s probably exactly what he did. But he took a little time to stop in to some alien store and get me a souvenir. What a guy! 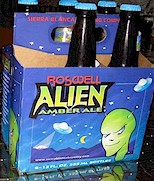 When I got home last night I knew to look in my fridge for the souvenir he had promised me. When he goes places he usually brings me beer. What a guy! So I opened my fridge and this is what was sitting in there. (Click on the image for a full-size copy.) And two things happened simultaneously.

END_OF_DOCUMENT_TOKEN_TO_BE_REPLACED

You ever get accosted in a gas station parking lot by one of these gangs in a white van, trying to sell you speakers for cheap? I have. Probably four or five times in my life. I’m always amazed at how this person’s story is so similar to the last person’s I heard. “Oh yeah the guy at the warehouse accidentally gave us a couple of extra speakers and if I don’t sell them, then the guy I’m delivering to will take them for himself and sell them. I just need some extra cash man!” Uh huh.

I’m also always amazed at how rude and persistent these people are. And how when I tell them to go screw themselves they start cussing me out. Well let me back up – I don’t tell them to literally go screw themselves. I say, “No thanks, I have a pretty good set of Klipsch 8.1 surround sound speakers in my theater at home. They cost way more than the speakers you’re selling, and are probably better, therefore.” Then they say, “Well you suck and don’t know a good deal when you see one!” And I say, “Uh, yes I do. Which is why I’m going to have to pass on this one.” Then they get mad and start cussing me out. Then I tell them to go screw themselves.

END_OF_DOCUMENT_TOKEN_TO_BE_REPLACED

Have you ever noticed that no matter what time they tell you your medicine will be ready (at the pharmacy) you will still end up waiting at least fifteen minutes? I’m curious, why the hell is it that Chili’s is able to tell me exactly what time my meal will be ready for pickup – and they’re always right on time – and they’ve only been doing this guaranteed time thing for like two weeks, yet pharmacies, who have been overcharging people for medicine for almost a hundred years still can’t get my mother freaking prescription ready on time? Wow, that was a long sentence.

END_OF_DOCUMENT_TOKEN_TO_BE_REPLACED

I wanted to say good things about the IRS. So I did. Now we can move on to other sentences I should say. Like, “To hell with the IRS,” and “Son of a bitch I hate the damn IRS,” and “Wow, so the IRS is like legalized crime, right? What the hell.” Those are pretty typical sentiments when talking about the IRS. IRS, of course, is an acronym that stands for Invasive Rape System. And for those of you who don’t know, they take your hard-earned money from you. So not only do you get raped, they take your money while they’re doing it. Then if you protest or anything, they do what’s called an “Audit” where they bring several friends to your house, dig through all your private shit, then take turns raping you before throwing you in jail. That’s right. If you don’t let them have their way, they throw you in jail to get what? Ass-raped some more.

So tax day has come and gone another year. I know millions of you filed extensions. And you know what I say about that? I say kick ass. I pat you on the back. Because you know why? Because screw them, that’s why! I filed this year on April 1 or so, and throughout the process got more and more angry as I watched more and more dollars get tagged to be sent to them. Oh, so the ten thousand dollars I sent you already last year wasn’t enough? Right. So I found as many deductions as I could, claiming everything I could think of. Donated to charity? (You can claim up to $500 without a receipt.) Uh, oh yeah. Now that you mention it, I did send about five hundred bones their way. Who the hell wouldn’t claim something you have to show no proof for? Duh.

END_OF_DOCUMENT_TOKEN_TO_BE_REPLACED

Global Warming is an issue I don’t take very lightly. I take it extremely seriously. I have, therefore, been working on developing some hard-hitting plans to help our great planet get out of this catastrophe. Some of my solutions may sound silly out of context, but in reality, I think they would really work. Like for instance, since you never hear people complaining about living in Hawaii, I figured we could move a couple of the continents (or build a new one out of dirt from the Sahara desert by dumping it into the ocean near Hawaii) down to around that area. See? That shit is genius. And it solves three problems at once. Number one, it makes a normally cold place like Antarctica really warm and beautiful. Number two, it helps with over-population. Because right now no one wants to live there except people of Eskimo descent. But a lot more people could move down there into that great big space if it was right on the equator. It’s like putting plywood in your attic so you can start using it as a room. And number three, well… Actually I don’t have a third reason. But I bet you can come up with one.

END_OF_DOCUMENT_TOKEN_TO_BE_REPLACED

Have you ever heard of the Anson Lights? Anson is a small town about thirty miles north of Abilene. There are some lights there. It’s pretty interesting. Seriously though, there’s a dirt road that leads off one of the main roads there, which you can turn down to get to the cemetery. The cemetery runs all the way down this road until you get to a crossroad. At that point, you’re supposed to turn your car around and flash your headlights three times.

Legend is that a woman’s husband ran off with her baby and so she and a search party went out into the field to look for him. Her request was that if anyone from the party found the child, he should signal by flashing his lantern thrice. So when you do this in your car, the baby appears in your back seat!

END_OF_DOCUMENT_TOKEN_TO_BE_REPLACED

Lisa, my sister, likes cereal. I actually used to call her Cereal Killa. No I didn’t. I just made that up. But I should have. Being that she lived right around the corner from me, she would skate up to my house (literally, rollerblades) and visit me in the mornings. However, I knew she wasn’t really there to see me. She was there to eat my Honey Smacks. Can’t say I blame her. That was some good ass cereal. I should place a hyphen there between good and ass. I’m not sure I’m fond of the thought of ‘ass cereal’. I digress.

So she would skate up and eat a couple of bowls of cereal just about every day. 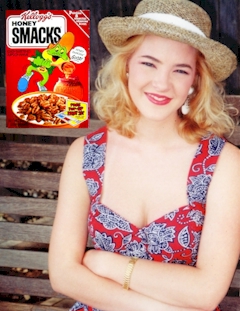 And I was finally like, “Why the hell don’t you just buy your own, then you wouldn’t have to skate a quarter mile uphill in your pajamas every day?” And she was like, “Then I wouldn’t get to see you.” Uh huh. At least the quarter mile home was downhill. Well, one day I was feeling particularly generous, so while at the store, I bought two boxes of Honey Smacks. And when she came up the next morning, I gave her one of the boxes. “Here, take this home and you can eat it whenever you want!” So she did take it home. After she had a couple of bowls at my house.

END_OF_DOCUMENT_TOKEN_TO_BE_REPLACED

Christmas is the season for giving. It’s better to give than to receive. Giving is the king’s – – you know what? That’s BS. All of these quips have one thing in common. They all involve giving stuff away. Well they have two things in common. They all involve someone receiving something. You can’t very well give something away without someone receiving it, right? Well I’m ready to be on the receiving end! That doesn’t sound good. But I’ve already made the joke, so I expect no comments containing jokes about me being “the receiver” and all that nonsense. It’s Christmas, people.

So I wasn’t going to complain, but now I think I am. Just a little. All of this giving is going on. And I’m doing quite a bit of it myself. SpaceBrew did really well this year, so I’ve been able to afford a few thousand dollars worth of stuff to give to family and friends. That doesn’t mean I want a seven-thousand dollar gift coming to me. (Well actually I wouldn’t complain…) But I would like a couple of little somethings to open. Yeah? Yeah. Is that so wrong?