END_OF_DOCUMENT_TOKEN_TO_BE_REPLACED

I spent most of the evening yesterday finishing up the decluttering of my house. This is the supplemental cleaning that compliments Sunday’s share of just over ten hours. I’ve been doing this while the family is out of town, you see. I had just turned off the light and – wait. Let me back up.

I’m not a sissy little pansy girl. I’m a man. A big, strong, mean mother cobbler. I’ve seen just about everything I need to see to qualify that statement, and have confronted every bit of it with a boldness I’d possibly not have considered I possessed. I’m not a bad ass, but there’s really just not anything that can scare me. Sure there’s stuff that will worry me or cause me to fret. Like the safety of my daughter, gas prices (good call, trumby) etc. But I’m scared of nothing. Well, until last night. Last night I became a sissy little pansy girl.

END_OF_DOCUMENT_TOKEN_TO_BE_REPLACED

As we all finish out our work weeks today and prepare to go home for the weekend, I would like everyone to remember what this weekend stands for. This is Easter weekend. Today is Good Friday, the day our Lord was crucified. He rose again on Sunday.

So how do we celebrate it? 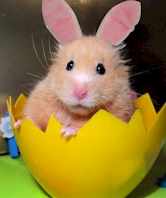 Well, of course… It’s obvious, right? A big fat bunny that lays eggs. We celebrate the death of the only sinless man ever to walk the earth by lying to our children and generally spreading old spoiled mayonnaise on the bread of truth for them. No one tells their children about Jesus and the horrible thing that happened to him – but the good news that he rose again. Even if you don’t believe it, it sure would make the world a better place if we taught our children to love. Instead, we make up some bogus crap about a bunny that – well, I don’t even know what the hell the bunny does.

END_OF_DOCUMENT_TOKEN_TO_BE_REPLACED

I’ve been thinking lately about the concept of governmentally invoked population control methodology. You know, like AIDS and stuff. You know that shit didn’t just happen. It had to be introduced. DNA structures don’t suddenly alter themselves to a detrimental deficit. Not even in African Green Monkeys. If that were the case, then I would expect all you idiots who believe we evolved from lower forms to seriously revise your theoretical foundations.

So anyway, I was thinking about these methods they use among other things, like conspiracy theories and the way people just disappear when they know too much. Shit like that. And I came up with an idea. Why don’t we shrink our problems away?

END_OF_DOCUMENT_TOKEN_TO_BE_REPLACED

Movie trailers are beginning to really irritate me. They have gotten so good at making movies look really really good. Then you go see them based on the weight of the trailer, and the movie blows horse snot. I’ll give you some examples. Number one is Vanilla Sky. I had so many people telling me it was a great movie, and that it had a good twist at the end. Okay, so I watched the trailer. Excellent! I can’t wait to see it.

It sucked. Well, that’s not really fair either. Most of it was good, but

END_OF_DOCUMENT_TOKEN_TO_BE_REPLACED

I hate superstitions. I think they are the stupidest hogwashical bullshit I have ever heard of. I will attempt to give you a few examples. Number one, the black cat crossing your path. It means bad luck. This tells me that at some point in history, a man was walking and a black cat crossed his path. Shortly after, he was attacked by a mountain lion or a dinosaur. Key: He either lived to tell about it or someone was with him. If he lived to tell about it I say he was lucky as hell. And to have the hindsight to realize that “Hey that was bad luck. It must have been the black cat that crossed my path a couple days ago.” Gotcha.

Number two: If you spill some salt, you have to throw some over your left shoulder. (or is it right?) This tells me that someone had an incident shortly after spilling some salt. And then realized it was the salt spill that had caused his bad luck. Right. So it happens again in his future and he decides to throw some over his shoulder, then discovers that doing so prevented another instance of bad luck. But if nothing bad ever happens, how do you know it would have? And what if you can’t remember the proper shoulder? Does it become even worse luck? What a brilliant guy! This holds no more water than a colander with me.

END_OF_DOCUMENT_TOKEN_TO_BE_REPLACED

Have you ever noticed the silence that fills an elevator when more than one stranger boards together? A nervous tension is evident in the air, and it’s like a vow of silence would be breached if someone were to open his mouth for a simple, “hi”. Why is this? In most cases, if you pass someone on the street, a simple nod, or a “hey, what’s up?” is usually in order. So why does this not carry over into a crowded elevator? It is beyond me. It seems the strangers around you would rather not even look directly at you. Everyone plays the quiet game, and stands as still as possible, staring at his shoes. An occasional glance at the floor indicator is the only sign of life among these passengers.

I have to ride the elevators to the fifth floor every day on my way to my office. As a rule of good measure, I generally try to start up some weird ass off-the-wall conversation, just to break some ice, as well as to observe people’s reactions. You would be amazed at how shy these people are. They treat everything you say like a yes or no question. I have been known to bring up such conversations as “Did you hear about the bicyclist on the freeway this morning?” or “What ever happened to that baby that was trapped in the elevator last week?” It really doesn’t matter what I ask. I sometimes ask the same question for a week. And since I never forget a face, I can tell if I have used it on them before.