What’s up Rita. Welcome to Texas! We’re excited to have you. Though it’s beginning to look like it’s gonna change course and head for Louisiana. Thank God! I hear they need the rain there in New Orleans.

So I was standing there watching the news today, showing pictures of the traffic on I45, deadlocked from Houston to Dallas. Now that shit is whack! But it reminded me of a story from my early twenties that I thought I should share with you.

END_OF_DOCUMENT_TOKEN_TO_BE_REPLACED

Did you know there’s a certain code you’re supposed to follow when shitting in a public restroom? I had no idea. For instance, if someone walks in while you’re taking a dump, you’re supposed to tap your foot to let them know the bathroom is in use. Forget that there’s another whole empty stall right next to you. This foot-tap is called the Fred Astaire.

Furthermore, if you are that unfortunate soul who has just walked unsuspectingly into an occupied restroom, you are supposed to turn around and leave as soon as you learn the stall is occupied. Otherwise you are a “Turd Burglar”. Rock on, turd burglars of America. I say screw ’em! If you can’t shit with someone else in the room you have a special kind of problem that needs some attention.

END_OF_DOCUMENT_TOKEN_TO_BE_REPLACED

We watched House tonight on television – great show, by the way – and as I was getting up to turn off the TV, the ‘next on’ bit came on to tell me what was going to be on the news at nine tonight. Immediately I got so disgusted I wanted to hit someone. Real hard. And this isn’t one of those annoyances – this was an almost incoceivably inconsiderate and disrespectful piece they were advertising.

She said it with fervor, “… Plus, how this swimsuit supermodel barely survived the crashing winds of the tsunami!” played against some moving footage of the woman modeling in a bikini.

END_OF_DOCUMENT_TOKEN_TO_BE_REPLACED

It came during darkness. In the late hours of the night, asleep, warm under my thick sheets. The darkness was thick, and cold. But I lay warm. The pounding of the wind upon my window, and whipping waves of rain scattering across the panes kept me wrapped like a babe in my safety. The deafening hiss and roar of the storm outside was nearing unbearable. But my tolerance was strong. My will, my fate. I would not go so easily.

All along, pounding at the gates of my spirit’s safe house, preaching at me the peril of being in its wake. To lie still was to give way to my fears. To move was to challenge it. I pulled tighter under my blankets and tried humming to myself. The louder the wind. I tried rocking. The louder the rain. The pounding was now so fierce, I thought it would surely overcome me. It was sure to break the glass with a touch more of its strength.

END_OF_DOCUMENT_TOKEN_TO_BE_REPLACED

Let me just say how much of a waste of time this was: it was a severe waste of time. I mean, I’ve sat through bad movies before, but this… This shit was worse than Highlander. This was the epitome of a shitty movie. It was written and directed by the same guy who did Twin Peaks, and all his stuff is the same. He tries for this abstract artsy type feel, and – well, he achieves that – but at the expense of entertainment. This movie is so abstract and ‘artsy’ that it fails to have a plot.

I’ve heard all the different takes on what actually happened in the movie, and I have my own as well. I understood it just fine. That’s not the problem, as it’s obviously not some low-brow B Movie. The problem was that even though I understood it, I found myself asking why? To what end? Who gives a shit what it means if it’s not interesting? So the whole first half of the movie was this girl’s fantasy, and the whole second half was reality. And… Well, that’s it. So now that we know that, what’s there to understand? It’s just gay.

END_OF_DOCUMENT_TOKEN_TO_BE_REPLACED

I have a bunch of qualms with Star Trek. For some people, all those interstellar movies are the hot shit. But I’ve found that Star Wars and Star Trek cannot peacefully coexist on the same shelf. For most people, it’s either one or the other. First of all, there’s the fact that all the shit in Star Trek is brand new looking. Like it’s never been used. Never been flown through a stellar dust cloud, or blown through an asteroid belt. Star Wars opposes. All the shit in Star Wars looks like it’s been around the universe a few times. Taken a beating. Looks a little more realistic.

Secondly, it pisses me off that Star Trek uses an up reference in deep space. why the hell are all the spacecraft planed on the same scale? Why is it that when two ships come in for close range combat, they are both upright? As if there is some universal up in null gravity. Obviously there is no up or down in null gravity. This tells me that some of the shots of the ships taken from distances should show the ship at awkward angles, not relative to the up and down you know sitting in front of your television screen. And furthermore, when there are two ships on the same screen, they won’t be exactly nose to nose, and there won’t be a common up. It just won’t happen, people.

END_OF_DOCUMENT_TOKEN_TO_BE_REPLACED

Why is it that women wear things that show off their beautiful bodies? That’s it. No buts attached to that question. We obviously aren’t allowed to look at them, so why is it that they force us to by wearing these things which accentuate their better parts? I’ve been less than happy with the results I get when I give them the attention they so obviously crave. Don’t tell me that these women don’t have a choice in what they buy. If the only clothing available on the racks was this stuff that shows midriff and cleavage, and hip-huggers, then all the old women out there would be wearing the same things.

END_OF_DOCUMENT_TOKEN_TO_BE_REPLACED

There are only two or three things in this world that piss me off more than when I find piss on the toilet seat. And I can’t really think of them right now.

You see, the whole qualm I have with it – besides it just being low class and disgusting, not to mention lazy – is that when you work in a corporate office such as we have here, you should no longer be a child. Obviously we have children working here, because no one has taught them how to raise a damn toilet seat before they micturate. And nothing pisses me off (short those couple of things I can’t think of right now) more than going in there to take care of business and having to wipe someone else’s piss off the seat. You don’t piss on the seat at home, asshole, so why do you do it where you work? Because you know Consuelo will be coming in to clean it up, huh? Children. Even my dog has better sense than that (inset picture).

END_OF_DOCUMENT_TOKEN_TO_BE_REPLACED

There’s no doubting that women rule the world. Anyone who doesn’t believe that, try living with one for a few weeks. You’ll catch on. I’m just wondering why so many of them are psycho. You remember that movie Beautiful Girls? Michael Rappaport says it perfectly: “They’re all sisters. You never let them behind the curtain. They’re all sisters.” What a brilliant man he was. That’s exactly what they are. 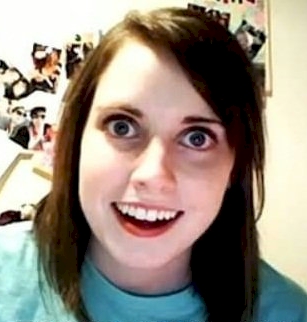 Otherwise, how would they all know when we screw up? And you notice whenever you’ve been single for a while and you finally find someone worth checking into, that’s when they all come to call. When it rains it pours, gentlemen. They all know. It’s like a little alarm in their heads go off saying “Johnnie’s got a girl now! Set tits to stun! Go get him girls!” And they do. They all come around. But you never see that shit happening when you’re single. Well, unless you’re like me. But that’s beside the point.

END_OF_DOCUMENT_TOKEN_TO_BE_REPLACED

My associate and good friend Storm had a little run in today. Being a professional photographer, he “happened to be” at the Tower Records Playboy Signing tonight. so he caught some excellent pictures of Tiffany. Oh. My. God. I was just talking about liking Tiffany and that she’s in the new Playboy and everything then he suddenly comes along and sends me pictures of himself with her. Bastard.

I think she looks better in these photos than the Playboy ones. Well besides the fact that she isn’t naked, I mean, she just looks more natural. No airbrushing either. And those tits! I think the buttons on that shirt must have popped off. These are four of the fifty or so that he sent me. And of course, I bled the color out and pasted a tag on them for his benefit. But if you want to see more, you can carry your lazy ass over to his site and order the full size ones. Eat your heart out, kinetic kim: