I have spent the last 42 days splitting my time between my second-storey apartment and a hidden complex of glass-walled rooms we call the lab. I could go into great detail about the lab, how all the walls on the inner rooms are made of glass from waist-high to the ceiling, and how if you are standing in D Room and look back toward the elevator it sort of feels like you’re in a carnival fun house. Someone could easily just stand still in the hallway between the elevator and the D Room, and you probably wouldn’t see them because of all the weird, eerie reflections and glares.

I could go on at length about the creepy machinery here in the D Room, the circulator and the penning trap, or the centrifuge… Or how about the awkward and cumbersome helmet that hangs in the corner on a shiny steel post, for use in emergencies? That one is kind of spooky. It actually blasts a low-power EMP into the head that wears it. Kind of gives me the shivers.

But if that’s not your thing, I could tell you all about my apartment, and how I spend a lot of time just sitting on the sofa. It’s two rectangular sofas, actually. I couldn’t fit a sectional in the small den, so I put a long three-seater on the east wall and cornered up the love seat at a ninety to it with a little table between them. When I’m daydreaming, I sit and look out the back door, which is sliding glass, and watch the birds gather on the balcony railing. Or that monarch that keeps coming back to visit and getting caught in the spider’s web in the corner of the glass.

You probably wouldn’t be interested in my going into a lot of detail about my new motorcycle or how I’ve joined a group and ride with them sometimes. Or about my new friends. But there’s one thing that might interest you more than all of those above. And that is that none of this exists in reality. Only in my head. I have spent the last month and a half creating my latest work of fiction. A novel called A Flutter in the Window.

It is my best work yet, and my longest. About 15% longer than Into the Darkness, which was my longest until just a few hours ago. And by a few hours, I really mean a few hours. I put down almost twelve thousand words yesterday, and almost nine thousand today. I’ve been on a crazy spree.

But you see, it’s always sort of been my dream to start and finish one book in one run at it. Meaning, without taking months or even years off in between. And this one I finally did that on. I started this book on May 31st and wrote something on it every single day. And finished it today. Perhaps that’s why it’s my best. I couldn’t be more proud. 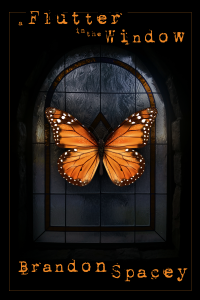 I also finished this year, two others. Red Bell, which I started with around 7000 words back in 2019, but wrote the rest of in one fell swoop this year. And Chasing Comets, which I started in 2016 and bounced across over the years adding words here and there. I finished that right after I completed Red Bell, in a quick weekend getaway, putting down twenty thousand words over two days. I will be releasing those before I release Flutter, because Red Bell finishes the Callie and Walter series. The tragic events that happened in Resurrecting Mars, which she began investigating in Into the Darkness, we finish up in Red Bell. She brings answers to all the questions we’ve had for all these years since I started the first of the series back in 2002. It was nice to put that one to rest finally. So it deserves to be put out there.

Then Comets, which is a standalone book about love and sexuality and that need and desire to have that ‘new’ sensation. It has big roots in music. The lead singer of a local band is the protagonist’s target. And though he doesn’t play music, he loves it. Listens to it all the time and discusses it with his friends. He’s the kind of guy I would hang out with. He could tell you where Graham Nash was when he wrote Our House, and what it was about, for instance. Or how Uptown Girl was just a fluke – an experiment that just went completely the right way. I feel like other people love music trivia as much as I do. I just don’t know too many of them. I spend a lot of my time making comments geared at throwing people off when we are listening to music together.

If an Eagles song, let’s say, Take it Easy comes on, I might say something like, “This was the song where Peter Frampton actually played the drums and the bass for the recording. It happened before he left the Monkees.” Or if Tiny Dancer comes on, I might say, “This was some of Bowie’s greatest work.” It’s fun. All my friends know how to respond. “Yeah, when Bono left the Talking Heads to join the Cure, that was the same time Peter Gabriel left Bruce Hornsby and the Range. To play for the Fixx.” Whatever. We have fun with it. If this also describes you, then you might really have fun with this book. A lot of music gets discussed by this group of guys. And of course, love. I call it the anti-romance, though. Be careful in making your assumptions just because I categorize it under Romance.

Anyway, I just wanted to throw a quick word out here about my progress. Finishing three novels since April 5th is a huge feat for me. Maybe for anyone. But definitely for me. Clearing my plate of the two old projects that I’d let get dusty, and starting and finishing a whole new one – well, I hope you can either relate or imagine how good that feels. My next month or so will be busy making edits to the first two, then maybe I’ll start writing my eighth novel. Once Flutter sits for a few months and I can detach from it, I’ll go back and edit that one too. Keep your eyes open for these three new books, friends. I think it’s the best writing I’ve ever done.

Here be Space: Collector of Collections

Farewell to the Help Desk