The Windup Girl
by Paolo Bacigalupi 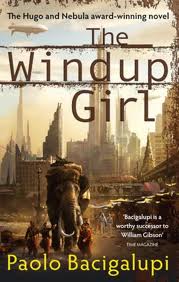 I have a lot to say about this book. It was a big book, so it needs a big review. And by big, I mean twenty hours. I listened to it on audiobook, you see. I think Jonathan Davis was a great narrator, but he reads very slowly. He’s very precise with his words, and his pauses between sentences are often pregnant with wait. This probably added several hours throughout the entire book. But it’s also big because Bacigalupi was very liberal with his words. If words cost money, he spared no expense.

It was good. Well written. Mr. Bacigalupi has a way of romanticizing famine and plague, terrible conditions and even rape with such smooth words. They feel like warm honey running over your skin. It’s very easy to latch onto the world, and feel like you’re part of it. His world is a post-apocalyptic version of ours, a couple of hundred years in the future. Not that he ever actually comes out and tells you that, mind you.

Beyond this, I found it very hard to follow. I was never sure who the white shirts were: were they trade or environment? I eventually had to go read about it on the internet. I’m not sure if I wasn’t paying close enough attention when it was explained to me, or if it was really just that difficult to follow. That is a downside to audiobooks, I guess. You do have to pay really close attention. And this is deep story. Not light. I feel I would have benefitted greatly had I read it first. Or not ever listened to it at all – just read it in print somehow.

There were several main characters – but not too many to keep up with. No, it wasn’t the number that made it hard for me to keep up with. It was my general confusion about who was whom. Akarat and Pracha and Kanya and Jaidee… Well, Akarat runs the Trade Ministry, and Pracha the Environment Ministry. Or was it the other way around? And Jaidee was a white shirt. Which means he worked for Environment. Or were the white shirts Trade? See where I get confused? And since it never really came out and told me point blank who is who, I found it hard to follow. Maybe I just missed it. And therein lies another small problem: I didn’t quite care enough to go back and listen. I figured it would just reveal itself if and when it needed.

Look at it this way: some people go to musea to look at the art with an appreciative, knowing and educated eye. They stand and stare at the painting. They admire the brushstrokes, the quality of the canvas, the way the oil shines… They can tell you who painted it just by the selection of colors and contours. Then there’s another group of people. This latter group just likes to look at pretty pictures. I put myself in the first group when reading some books. And I don’t know what it is – but somewhere along the way a switch gets flipped and I turn to the second group if I discover something lacking. This is one of those books that did that to me. The words are beautiful. It’s nice listening to Jonathan Davis masterfully detail the world of the Thai. Very cool words. Dirigible. Somdet Chaopraya. Emiko. Nippon genehack weevil. Blister rust. I could listen to it all day. But at some point it got so complicated that I just turned off the part of my brain that really cares. I’m not saying it’s so complicated I can’t follow it. Or I don’t have the capability of understanding it. I’m saying I don’t have the desire to.

I’m also not saying I don’t understand what’s going on at all. Just some of the things I let slip by me. Shrug. The point is, it didn’t really matter to me in the end, because the story wasn’t so great that it grabbed me by the shoulders and shook me into submission. YOU WILL PAY ATTENTION. THIS IS GOOD STORY. And that’s not only because I listened to it. I listened to Peter Clines’s 14 a few months back. And that was good. That demanded my full attention and understanding. That was good story. Story worth following. This? Well, it’s all right.

I’m not one who sinks into the let’s-throw-stones-at-Paolo-Bacigalupi group. I don’t believe he’s a racist just because Emiko, the windup girl, is a stereotypical Asian woman. I think he had an idea for her, and used it. It fit with the gene-ripping of fruits and foods, and the calorie men’s mission. It all sort of went hand-in-hand. Like I said, it was very attractive to the ears – and I’m sure to the eyes as well. But the story just didn’t have the weight of Something That Mattered. I don’t know why. I guess I never could attach to the characters with any amount of real concern. I didn’t connect. I couldn’t relate.

So I said all that to get to this: the story was hard to follow, mostly because Mr. Bacigalupi wanted it that way. He wanted to keep it a mystery until the end. Not hard to follow as in keeping up with the characters – that was just my lax attitude. I’m talking about what’s really going on in the story. You can’t really tell until the end. And stories like that better be damn well told, if you ask me. They better grab you by the shoulders and shake you. Demanding your attention. And the bottom line is this one just didn’t.

Here’s the thing about weddings.

Do we need a better mouse trap?

This column is 945 words long.