Seriously, dudes, I have to tell you about our night Friday night! Okay, well – okay, well hang on. Let me catch my breath. It’s Saturday morning here – well, feels like morning, it’s actually well after noon – but I got my damn face (and most of my ass, neck, thighs, back and arms) rocked the hell off last night. Son of a bitch. Okay, let me back up a little though.

I was sitting at my damn desk at work when the HR director came up to my desk and said, “Hey, yo, Space. I got these tickets, dude,” and gave me four tickets to Nickelodeon Storytime at Verizon Theatre. And yes, they spell it with the tre instead of the ter. Idiots obviously don’t know the difference in the definitions. Anyway, yeah, we took the girls to the theater to see the Backyardigans and Dora the Explorer on stage and all that. They loved it, of course.

But here’s the real deal: on the way out to Grand Freakin’ Prairie, we heard the weekend concert calendar on Sports Radio 1310 The Ticket. And you’ll never believe who came to town without my even knowing it. Oh. Yeah. Okay, well, so you did guess it. Very good. So we sat through this whole Backyardigans bullsh for an hour and a half knowing that as soon as we got done, we’d be driving back to Coppell, dropping the girls off, then turning right back around and heading out to downtown Dallas. A lot of driving. But see, the thing is, I wouldn’t have cared if it was a two-hour drive. We were going to see my honey.

So we got there, paid our cover, and I grabbed my red-haired wife’s hand and start bee-lining for the Green Room in the back of Poor David’s, where the band members hang out and get ready. See, I used to hang out back there when we played Poor David’s. Well, she stopped me halfway through the room and says, “Dude, she’s right there.” Oh. Okay. See, Step has been wanting to meet her since we got together and I started telling her how awesome she was. I know, that was a lot of pronouns. Now you know how my red-haired wife talks; by the end of one of her stories, she’s thrown in so many pronouns that I don’t have any clue who did what and to whom.

So we went up there by the bar and introduced them. It was really nice to see Patrice after two years. She had a nice hug for me. And she approved of my new wife. Apparently quite liked her, in fact. So they took the stage and just rocked so damn hard that I couldn’t sit down. Patrice’s stage presence is ridiculous, too. I learned a lot of my presence from watching her. She wore these knee-high leather boots with black and white striped Hello Kitty socks. After a few songs, she took her boots off, played for a while, then finally set her guitar down and went to take her socks off. She tied them together and stuffed them in the bassist’s pants, making it look like he had a tail. 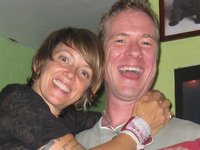 And she gets sexy when she plays. She unzipped her vest pretty lowly and played with a lot of chest showing, which was pretty hot. But then she took a roll of black duct tape while everyone else was still playing, tore off a couple of squares, then reached inside her vest and covered her nipples with it. Then off came the vest. You see, someone had thrown a t-shirt up on the stage, and she wanted to put it on. Anyway, that spurred more action from the crowd, so this chick with huge massive jugs just whips her shirt off, then reaches back and starts undoing her bra. I was like, “Aw hell, it’s coming off!” And it did. She bounced around, dancing and running all over the place with her gigantic moonbags just shaking like five-dollar Jello. It was truly a sight to behold.

Patrice came down off the stage at one point, then stepped up onto someone’s table and rocked their damn faces off for them. She pretty much rocked everyone’s damn faces off last night. It was terrifically awesome.

So after the show, we went back into the Green Room and hung out with the band for a little bit, got our pictures taken with them, and I told Patrice how much I loved her and how she was the baddest bitch on the planet. I was drunk, so I might have made a fool of myself, but that’s okay. She’s a friend.

I posted the best sixteen pictures from the night – short the several of the gorgeous titfest that ensued – on our Picasa Web. So go check them out. I’ll probably post a video or two on my Facebook too. Hell yes, friends. She rocked most of my body off.

Happy Birthday Hard to Come By

Down In a Hole

This column is 827 words long.