Here’s a hot sports opinion for you: I think cheerleaders are annoying.

What, you wanted more? No, that’s it. Yeah, that’s all I wanted to say. I think they’re distracting, irritating and annoying. And boring. Sigh. Okay, I’ll explain for you. We go to my son’s football games, and we sit in the bleachers and – well, since he’s in middle school, they don’t take football near as seriously as high school and – well, I … let me start over. Okay, the schools at which his team plays only have bleachers on one side of the field. Which puts you in the uncomfortable predicament (pre · di · `CAY · ment) of sitting right beside the opposing team’s fans. And, more specifically to my point, both groups of cheerleaders are right there next to each other. On the same side of the field. Like five yards away from each other.

Okay, so I know they’re mostly pre-teen girls. Maybe some of them are thirteen. So they’re not professional yet. And one group will do a cheer, then turn their heads and watch the opposing team’s cheer squad do their cheer. And so on. It’s cute. And these girls can barely jump over a basketball. When they introduce themselves, they jump up in the air and spread their legs and touch their toes and shout something, but since they’re so tiny and their voices are so small it just sounds like a garbled mess. Or maybe I’m just deaf.

And another thing. They all do the same cheers. Yes. Our team’s cheerleaders will do a cheer, then you’ll hear the other team’s cheerleaders do the exact same cheer a few minutes later. Or even sometimes, right after they finish. And each squad only knows like fifteen different cheers, which, technically are all just different variations of the same claps and armswings and legkicks and shouts put into different orders while saying different things. “We’re so bad, we’re so bad, we do this, we do that, we do it once! We do it twice! We play some ball! We want some rice!” Or something to that effect. 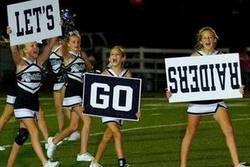 Then they look at each other, decide which one to do next (again) and start again. You literally see every cheer they know like four times throughout the game. And it never. Effing. Stops.

It’s so distracting that I can’t hear what’s going on in the football game. And since these are cheap-ass middle school stadiums, the field is not dug into the ground at all. It’s at ground level. And the bleachers aren’t elevated that much. So even at the top seat, you have almost a flat-on view of the game. Which means the tiny little girls are nearly blocking your view! And I’m not ranting against other people’s kids. I think if my girls were cheerleaders, I would come to watch a few cheers then peace out. Seriously, it’s that annoying. A constant barrage of LGS throughout three quarters of the game.

Yes, friends. They take the third quarter off. And it is so nice. Finally some peace and quiet so I can watch my son run some plays. From the side view. Where he gets lost in the crowd. But anyway.

So what about college? Or pro football? You see the cheerleaders at a college game or an NFL game and they’re usually watching the game. If the team scores, they shout and holler and make some ruckus, then they’ll run a cheer. And it’s not some little girl cheer. “Hey you know you guys all suck! We will smear you like a truck! Oh shit! Yeah, yeah, oh shit! Uh-huh, you say, oh shit! Bitch, just go grab Rick and Steve! Get the hell back on your truck and leave! Woo!” and so on. But they’re not constantly cheering during every second of the game. It’s a lot more thoughtful.

I still find them slightly annoying, because people don’t really get into the cheering because of them. Do they? I know I never do. I just don’t really pay much attention to them. I’m there to watch football. They don’t get me riled up by clapping and shouting phrases that rhyme. And in the case of the middle-school cheerleaders – I wish they would just go sit down. Or maybe have a special section on the other side of the field for people who can’t seem to get into the game. You know, people who need to be led in cheers.