I like to pronounce it co – in – `SIDE – ence. I think it sounds a little more swass. Kind of like saying “shed-yule” instead of schedule makes you sound intelligent and business-like. See, saying certain words a certain way keeps people on their toes. ASS – per – AG – us is a rich way to say asparagus, for instance. See? Try them out. See what works best for you.

But speaking of coincidences, I have another couple to add to the list of weird, almost impossible coincidences I’ve experienced. Check this out. You remember the column where I talked about a couple of the crazy things that happened to me? Well here’s another one. When I first moved into this house, my washer went out. See? Crazy, huh? No seriously. It went out, so I got on craigslist, blah blah, met the woman at a storage place that ends up being RIGHT BEHIND WHERE ONE OF MY BUDDIES LIVES TODAY.

Seriously. Well, that’s not the cool coincidence part though. So I brought it home, hooked it up, and of course it doesn’t come anywhere close to matching my dryer. But who gives a shit, right? I like buying used because it helps a brother out when he needs to get rid of something. And as long as it works, and you get a good price, why the hell not? Am i rite?

So anyway, I keep using my mismatched set for a couple years. Here we are a couple of years later. Bam! My dryer goes out. So I get on craigslist, blah blah blah, go hit the guy up, says he needs to move it, it has a big dent in front but that’s all supaficial, so I give him a hundred bucks and take it home. I get home and slide it into place right next to my used washer, and BAM. It’s a match. Bought two years later, from a completely different dude in a completely different town, and it’s a match.

No, I don’t just mean the same brand. I mean the matching model from the same year, lot, and everything. See pic for your satisfaction. 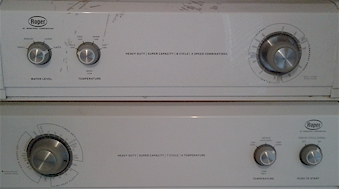 My tablet doesn’t take very good pictures. But you can tell, those appliances look like they were separated at birth. Crazy.

And for one more. I’m checking out some goods at this souvenir store at the Rangers ballpark, and I see this big black security guard. He’s wearing a name badge with a crunk ass name on it. So I walked up to him and I said, “That’s a right bitchin’ name, brother. I hope you’re living it up.” And he says, “Ah, you know it son.” So I started talking to him. And then it clicks. Wait. Didn’t you work at the 7th Component Repair Squadron, Dyess Air Force Base in 1997? Yup. He was my supervisor for about six months. How the hell I didn’t recognize his face immediately, I have no idea. I don’t usually forget a face. But there you have it.

Maybe that’s not so much a coincidence, but it was one of those small-world scenarios that I think are pretty cool. And one always walks away saying, “What are the odds?” Which is at least in the same family as coincidence. Go ahead. Share your stories in the comments section below.

The Importance of Good Grammar

The Year in Pictures

The New Rules of Tipping

This column is 554 words long.