I suffered through a horror movie last night, because someone very special to me told me it was the scariest movie of all time. He had never been more scared by a movie than this one. All right! Well, considering the source, I had no reason to doubt him. I’m sure, in fact, that he was being completely honest. However, comma, I don’t think he’s seen many movies in his life. He is, after all, only thirteen.

But I’m not really here to rip on the movie, though it did suck pretty badly. Like a brand new purple Dyson. In fact, I wasn’t scared of creeped-out even one time during the entire film. Not even startled by the Dolby shocks. Seriously. I’m not bragging here. When I watch a ‘scary movie’ I want to be scared. I want to wake up with nightmares when I go to bed. I want the horrifying images I’ve seen on the screen to haunt my waking days for the next week. I want to be terrified. The Possession didn’t even come close.

The problem is that it takes the path that most quote horror movies unquote take, and that’s fear through sudden startling music and action. A little girl looking in a mirror at the back of her throat with a flashlight, and then BAM SUDDENLY LOUD VIOLIN-STRING SCRAPING WHILE A FINGER COMES OUT. Yawn. Or it’s really quiet while someone is listening to noises he hears coming from inside the wall. And them BAM! A hand busts through and grabs him by the throat! Sigh.

Well, the cliche bit of that just doesn’t work for me. Does it for anyone? I mean, I don’t walk around being afraid of a demon’s hand coming up my throat. Or someone punching his fist through my wall from the inside and grabbing my throat. Shit like that just doesn’t happen. Sudden shock-type action just doesn’t work on me. I’m not saying I never start. But I usually don’t. Because I’m sitting there watching a movie that’s supposed to scare me and so I guess I’m ready for it. Waiting. If I were watching Hot and Saucy Pizza Girls and it got real quiet, and suddenly a fist punched through Desiree Cousteau’s belly, yeah I’d probably flinch pretty hard. Especially considering what I was doing. 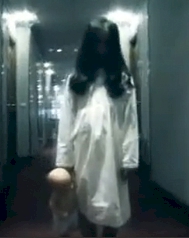 Speaking of cliche, what about pretty little brunette girls who stare at you through the top of their eyes, their hair parted down the middle and hanging over their shoulders, nightgowns of white and hands hanging limply at their sides is supposed to frighten me? Sure it looked creepy back when it was done the first few times. But now every single movie is using that same device. It’s not scary anymore. I don’t know. Maybe little girls just don’t frighten me. I have two of them. Trust me, the opportunity is there.

And they all move so slowly. The little girls all walk so laboriously slowly. Seriously? You want to scare me? Show me a fast zombie little girl who could outrun a flippin cheetah running on the walls and jumping down to eat someone’s head and I’ll show you some goose flesh on my arms. Remember Exorcist anyone? I mean the uncut version, where she spider-walked down the stairs? Eff that bee ess, friends. That shit was scary. But there again, you have a dark-headed Linda Blair who is possessed of some evil spawn of Satan.

I just want something totally original. The Others was (and still is) my favorite horror movie of all time, because it was completely original. They were the ghosts. The ghostly noises coming from upstairs were the living. And the ghosts couldn’t see them for a change. That was refreshing. And very well done. The darkness of the house and the quiet of the old setting of the house made it especially creepy. There were plenty of bam-shock moments and detuned violins in that one too, but they were used a lot more effectively. The door slamming back on Nicole Kidman’s face, the pattering of footsteps and movements in a completely daylit room… If you can scare me in a bright daylit room, you’re doing something right.

Maybe it is that we’ve all just grown too used to the Hollywood way when it comes to horror movies. Nothing scares us anymore. You want to scare me, show me some guy being buried alive inside a coffin full of live rats. I’m not afraid of coffins. I’m not afraid of rats. But if you were to mix the two and throw me into one, you’d hear a little girl scream, I guarantee. Or show me a helmet-cam video of a guy climbing an eighteen-hundred-foot radio tower with no harness. You’ll see my palms get sweaty and my skin turn white. I guess it’s all about catering to a market of fear. Is the market more likely to chill from the site of a demon ghost in an MRI monitor, or someting more realistic, like being buried alive? You have to play on real fears. Show me a movie about a kidnapping and you’ll see me get real uncomfortable real fast – as I’m sure any good parent would get.

I’m not giving up on the horror movie just yet. But I sure am disappointed with the way they’ve been trending toward the cliche in a downward fashion. I haven’t been scared, startled or spooked at all by any of the scary movies I’ve seen in the last few years. And that makes me sad. Almost as sad as watching The Notebook and not crying. I wanted so badly to see a tear-jerker that actually jerked my tears, and was so let down that I almost cried. Well, in this case, maybe I’m scared – truly frightened, horrified even – that I may never see a truly scary horror movie again. Yeah. Now that scares the hell out of me.

Silly Kid, Toys Are For Adults

This column is 985 words long.