My red-haired wife and I watched Gray Matters last night. It’s a chick-flick. You see, chick-flicks are not my first picks when I’m looking for movies, and it’s certainly not my favorite genre. But I am an artist, and can appreciate all kinds of art. Which is why I’ll listen to rap if there’s actual talent to be heard in the track. Shrug. I don’t close my mind and avoid watching (or listening) to something just because it falls into a particular genre of which I’m not typically fond. I am also very objective in my reviews of such pieces, because I’m evaluating the art. Not the category. That being said, this was a fine movie.

I will back up a second and admit to you that the only reason I rented this one was because Heather Graham is in it. And so is Bridget Moynahan. And there happens to be a particular scene in it where they… I don’t know how to say it… uh, they, well, let’s just say they kiss a little bit. No, I am NOT shallow. But these two women are pretty close to the top of my celebrity hit list and so if they’re kissing each other, I need to know about it. And I need to see it. And not to ruin the movie for you, but the kissing scene of which I speak was really well done. Tasteful and not gratuitous, surprisingly. Yes, seriously, I was really surprised that it wasn’t just a gratuitous make-out scene the director threw in just to classify the movie. It was cute, fun and – well, very believable. And damn sexy, if I might say so. 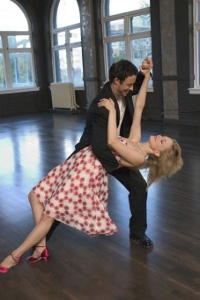 Moving on. So the basic premise of the movie is that this woman, Gray (Heather Graham) and her brother, Sam (Tom Cavanagh – from the TV show Ed) are siblings. They live together. They dance together. Everyone thinks they are a couple. They both decide it’s time to maybe branch out a little and change that perception. You find me a woman, I’ll find you a man. Only it ends up being that the woman they find for Sam ends up being Bridget Moynahan, and who the hell can resist her? Come on, the greatest quarterback in the league can’t be wrong. So Sam and Gray both fall in love with her. Okay (slowly nodding), that’s a plausible storyline. Hasn’t really been done too much – if at all, and I can dig it for originality alone.

Now throw in the comedic genius and star presence of Molly Shannon and the stature of Sissy Spacek, and you’ve got a pretty good cast overall. Though Spacek didn’t really do much for me in this one, she’s always just pretty awesome by default. And let me also throw this in there. And I’m going to type it twice so you don’t have to back up and read it a second time: Heather Graham’s acting was superb. Heather Graham’s acting was superb.

I know, right? That’s a trip right there. Trust me, fellas, I don’t rent her movies for her great acting. I mean, really, who can sit through Killing Me Softly for the acting and the plot? Has anyone actually even seen that movie? I mean, besides Siege and I. Yeah. She likes to get naked. So I like to watch. But she was great in this. They gave her lines and she spouted them off believably and quickly and flawlessly, and I found myself nodding a bunch. And I mean that type of nod where you purse your lips, raise your eyebrows and look at your buddy and say, “How ’bout that?”I have to give this movie four stars. Maybe a half-star comes in because I was so happy my red-haired wife actually stayed awake for the whole thing, and another half because Graham didn’t rely on her magnificent breasts to get her the part in this one. She actually had to act. Storyline was good, characters were thick, complex and sophisticated, and – of course – acted well. I mean, I really have no bad things to say about this film, and am really surprised it got such poor reviews and such a low rating on IMDB. It was good.

All said and done, we had a good time watching it from the very first scene, where Graham and Cavanagh are ballroom dancing to Irving Berlin’s 1935 classic “Cheek to Cheek”. And they look like they’ve been dancing together for years. It really gets you moving. Later in the movie, the three of them do more of the ballroom dancing in a bar. And later, Moynahan and Graham dancing together in the apartment. Excellent, excellent scenes. Watching them flail their arms around and spin and dip and smile and dance and do it with absolute kick-assery brought a grin to my face every time. I’ll watch the movie again just for the dancing.

Bottom line, I’ll be watching this one again. it’s not a mysterious plot with some hard twist and deep scary music that gives you chills down your spine. There’s no gunfighting and big muscles, there are no sex scenes (though there are some good shots of Moynahan’s tiny ass in a ridiculous little lingerie thing) and no car chases. It’s just good, fun entertainment and lovable characters. Two-Step says she’ll be watching it over and over. I might just have to join her.

A Storm of My Conscience

This column is 903 words long.