My red-haired wife and I spent the last weekend in San Antonio (or as my daughter says, “Sanny Tonio”) at the ISTE conference. For those of you who don’t know what that is, it’s a conference for the International Society for Technology in Education. And as you all know, my red-haired wife and I both work for an EdTech company. Don’t feel bad if you didn’t know what the ISTE was. Neither did I, until I found myself working it.

Since I started working in Design, I’ve found myself in a lot of situations like this. Travel situations, that is. Design has already sent me to New York and Minnesota. And there’s a lot more to come. My boss and I were running the Lounge section of our booth, where we were demoing our new dashboard we’ve been designing. There were several other sections of our booth where other products were being shown, and my red-haired wife was working the welcome desk, as seen in the picture below. So let me tell you about this conference center.

It’s just a really, really, really, really big convention center, full of booths where people show off and demo their products. Seriously, I’ve never seen a building this big. At one point, I had to walk from our booth, which was pretty close to the middle of the building, to the exhibitors’ lounge, and it was about a quarter-mile away. Courtney, a product manager, was wearing a pedometer as she made her way around the booths, and said she had walked some eleven miles in one day, and never left the building. You could fit several shopping malls inside this convention center, and still have room for a couple of auto dealerships. Ridiculous.

So we had the biggest booth there. Yeah. No kidding. Fifty by fifty. Wut wut! No. I’m not kidding, our booth was 2500 square feet. That’s almost as big as the living area of my house. And there were hundreds of other booths. Ours was bigger than Microsoft’s, Samsung’s, Google’s and Britannica’s put together. Insane.

Well, it was a really cool experience, getting to be a part of that. I wish I would have had more time to walk around the place and see some of the other exhibits and check out some of the other companies. You know, to get some ideas. But I was so busy demoing our product that I barely had time to take bio breaks. It was crazy busy. And Two-Step was bringing people in like a tractor beam.

We also got to walk around Sanny Tonio in the evenings and check out some of the bars and nightlife. We had a few drinks at an Irish Pub called Waxy O’Connor’s, where they had a “glitch in the kitchen” and it took a really long time to get our food. So they bought us all an extra round of drinks and knocked off half our food bill. So that was cool. When the waiter told me they had a glitch in the kitchen, I started thinking of a rap. Gotta glitch’in the kitchen, so stop yo bitchin’… You know. Something like that. Maybe throw in something about itchin’. I’ll work on it some more.

We stayed in the Hyatt Place on the River Walk, which I would recommend highly. Our room had a tiny little bathroom, but a pretty awesome living area with couches, a bar, and an office area. The staff there was super cool and let us check out really late instead of having to pay for another night just to be able to have a home base until we left. 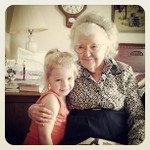 One of the best parts of the trip though, was that Laynie got to see her great-grandmother. Grandmother was there when The Bug was born, but they haven’t seen each other since. So of course, The Bug doesn’t remember her. But she warmed up to her quickly, and got to know her great-grandma a little bit. Grandma is ninety-six years old now. She may live another ten or fifteen years. Or not. Who knows, right? So it’s nice Laynie got to spend a little time with her.

That was pretty much it. Three days in Sanny. We didn’t see the Alamo. I’ve been. It’s kind of boring. I think it’s fascinating to read about it and all that happened there, but man – going and seeing it? Yawn. It’s a four-walled stone building. Just really not much to it. The River Walk is nice. We had lunch down there at a Mexican restaurant and had a few beers. And we had breakfast at a place called The Guenther House two mornings in a row because it was so awesome. We met my dad’s cousin and his wife there and visited for a couple of hours while Laynie ran around chasing ducks and birds in the yard. Beautiful place.

I will tell you one thing. That is a long drive with a four-year-old in the car. Though she only needed to stop one additional time over the normal two we all had to stop, she was a perfect little angel in the car. Never whined, cried, fussed or anything. She quietly played on her tablet or played with her dolls or just looked out the window. I was proud. It’s funny though that you can drive for five hours and only cover a quarter of the state, whereas when we drove from Boston to Bar Harbor last month, we covered three states in less time. I guess Texas is one of the bigger states. Would you look at that?

So now we’re back. We unpack our suitcases and wash the clothes, only to pack them back up to head out for Florida this weekend. And there will be seven of us on the first flight in. Seven of us fly in on Saturday, then four more people fly in the next day to meet us there. It’s going to be off the chain. And we plan to be loud in the plane. We’ll be shouting and drinking and singing pirate songs… So if you’re on the red-eye from D/FW to Tampa this weekend, holla. You can sing along. Next column from sunny Sunset Beach! Have a great weekend, friends.