I hate superstitions. I think they are the stupidest hogwashical bullshit I have ever heard of. I will attempt to give you a few examples. Number one, the black cat crossing your path. It means bad luck. This tells me that at some point in history, a man was walking and a black cat crossed his path. Shortly after, he was attacked by a mountain lion or a dinosaur. Key: He either lived to tell about it or someone was with him. If he lived to tell about it I say he was lucky as hell. And to have the hindsight to realize that “Hey that was bad luck. It must have been the black cat that crossed my path a couple days ago.” Gotcha.

Number two: If you spill some salt, you have to throw some over your left shoulder. (or is it right?) This tells me that someone had an incident shortly after spilling some salt. And then realized it was the salt spill that had caused his bad luck. Right. So it happens again in his future and he decides to throw some over his shoulder, then discovers that doing so prevented another instance of bad luck. But if nothing bad ever happens, how do you know it would have? And what if you can’t remember the proper shoulder? Does it become even worse luck? What a brilliant guy! This holds no more water than a colander with me. 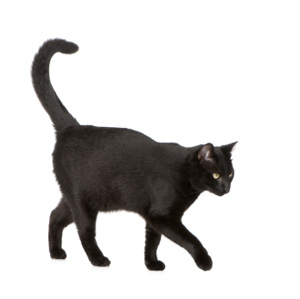 Walking under ladders, breaking mirrors, walking through crossroads… I try to do all of them whenever possible. Just to irritate the superstitious weirdos. There are also the superstitions that have to do with routines. Like every time I watch a Stars game they lose unless I am wearing a Stars jersey. Horse shit. That’s not superstitious. That’s chaos math, people. You can’t control the outcome of a game by wearing a different color, or a certain pair of socks – any more than I can change the weather by washing my car. It’s ridiculous some of the things people come up with.

I have actually had friends not want to do something or go somewhere because of the day of the month. Or because they broke a pocket mirror. What the hell ever. If breaking a mirror gives you seven years of bad luck, then there has to be a polar opposite. Fixing one should give you fourteen of good luck. Or hanging one on the wall without breaking it. That should give you seven of good luck. You can’t have good without the bad. A white cat crossing your path should give you good luck. Or cancel out the bad luck the black one brought you. Every time you climb a ladder, that gives you as much good luck as walking under one gave you bad. You see? People by nature are so negative that they rule out the positive.

People in general, I think it’s fair to say, are morons. You know, I’ve never had to knock on wood either…

Where are the good cats?