DirecTV is my satellite service provider. But when I say ‘service’ I use the term loosely. And I’m talking loose like a two-dollar whore. You know, like throwing a hot dog down a hallway loose. They don’t actually provide a ‘service’ in any respect, if you want to get technical. What you have is them flipping a switch which allows you to receive certain channels on the box you pay for. So you pay for a box and they allow programming to be sent to your dish. Right? I mean they don’t really have to do anything after the install of your equipment is finished.

And that’s the thing. They don’t actually install anything. Well, at least not properly. You see, there are different crews when it comes to installing and repairing. Example, an install crew comes out, does a shitty ass piece of mothercobbler shit ass job of installing your shit, and leaves as fast as possible. They get paid per job. Not per hour. So then what happens is your shit doesn’t work. So you have to call the company. Who then dispatches repair crews out to your place. Not the original install crew. Not any install crew, for that matter. And for that matter, how about another matter – they aren’t even the same company. The repair crews work for a different company who is contracted out by DirecTV.

So they just drive around cleaning up the install crews’ messes. And God forbid you leave your girlfriend at home to meet the install crew. Okay let me stop essaying this and just tell you what happened. I had DirecTV service. And I use the word ‘service’ loosel- – oh wait, I already made that joke. Anyway. I was getting service to four receivers in my house. I decided I wanted to see what this HD fuss was all about. Because I remember when HD floppy disks came out, they were twice as dense. Hence the term HD, or high density.

So I went out and bought an HD television for the Space Bar. Hyper Deluxe? I don’t remember. Has Dreams? Who knows. Anyway, I bought a wide screen to sit on top of my Space Fridge in the Space Bar, which is in the back of my Space House. So my Cowboys Crew who always watches the game in the Space Bar started realizing that an HD television doesn’t display digital signal very well. So I needed HD signal. We wanted to watch the Cowboys games in Heavy Doses. 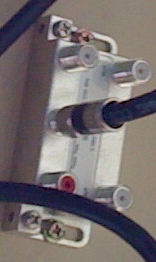 So they had to come out and install an HD dish and bring me my new HDDVR and a new HD receiver for the Space Bar. Well they hooked it all up while my girlfriend was there. They showed her, “Hey, see it works!” on the television in the living room. And that was that. They left. So we turned on the only HD television in the house, which is the one in the bar. And it didn’t look very HD to me. So I called and said, “Hey yo I’m not getting HD channels out here, and it doesn’t look very HD.” They told me that they would have to send a tech out to fix it for me. So he comes out a few days later and showed me the multi-switch on the side of the house, under the dishes. See the picture.

See the red circle on the enlarged version? That’s the multi-switch. See the single cable coming into it? That’s from the new HD Dish. See the other cables coming out of it? Yeah. There are none. So none of the receivers are actually plugged into the new dish. Of course I’m not getting HD. Cocks. So the repair tech hooked it all up and it works brilliantly now. I’m getting Hella Dynamite signal now on the television in the Space Bar and it looks crystal clear. But it pisses me clean off that I had to have another crew come out – and wait a week – before I could start using the shit the installers installed. They left out parts (the power block thing) and didn’t even connect the shit. Complaints department here I come!

Fear of a Silent Elevator

This column is 758 words long.