What? Another review? Yeah, well the only other things to talk about right now are getting kicked like dead horses, with boots covered in bacon. And the guy doing the kicking has a blister on his foot because there’s a hole in his sock. And his wife is a dental hygienist. So yeah, it’s kind of tiring. I’m already tired of the conspiracy theories about how dude isn’t really dead. Or how he’s been dead for a long time. Seriously? We need another conspiracy to latch onto?

Let me begin by formally introducing you to Ricky Gervais. If you don’t know who he is, then this is important. Because he’s the guy who created television’s The Office. Ricky has also been in a couple of films, such as Ghost Town and The Invention of Lying. In other words, he is a very funny guy. I have recently begun renting some more stand-up concerts though, and came across this one. 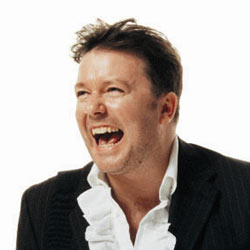 The first thing you’ll notice about this stand-up act is that Ricky doesn’t hold onto a microphone. He’s wearing an earpiece with a voice wand, so both of his hands are free. I know that most comics like to have a microphone in their one of their hands so it doesn’t feel as awkward standing up there wondering what to do with their hands. This is one of the first things you learn in stage school is that the microphone can be a prop, and can make speeches and singing in front of an audience more comfortable.

Anyway, he’s very professional, in that he looks completely and totally comfortable up there with both hands free. He uses his hands to emphasize and to help him tell his stories. It really spoke to me about how good he really is. Another thing, to a lesser extent, is that he’s wearing a plain black t-shirt. So he’s not trying to look extra super cool or anything. We know he doesn’t have washboard abs, and he’s okay with that.

One thing you’ll probably notice pretty quickly is that he goes on little trips with his stories and stays on them for a while. One could almost make the argument that he’s belaboring the point. But that’s not really accurate, because it just keeps getting better and better as it goes on, until he wraps up the story. He covers every point there is to cover in every anecdote, and leaves nothing to imagine. He also pulls no punches, which is a lot of why he probably won’t be invited back to host the Golden Globes. But you know what? I say cobble ’em. If Tom Cruise and John Travolta aren’t big enough men (all gay jokes aside) to take a few hits from the joke factory, then they shouldn’t be in this business. I thought Ricky’s act was hilarious, and worthy. I think he should host it and roast those bastards every year.

So this particular gig was in New York, and runs a little over seventy minutes. I like it that he didn’t feel so pressed for time (short of material, either) that he felt he had to cut it off at sixty minutes sharp. Again, just seemed like he totally belonged on that stage, and could have stayed up there as long as he wanted. But it’s all ridiculously funny, and in the interview on the back of this DVD he talks about how his jokes are written to make him look like he doesn’t understand what he’s joking about. Of course, he’s smart enough, and hopes his audience is smart enough to get that. He doesn’t really think AIDS is funny. He makes it funny though.

The bit about Humpty Dumpty went on for a good solid five or six minutes, and I literally had to pause the playback, stand up and walk away for a few minutes. At one point I was keeled over laughing so hard I almost vomited on my trousers. I had a full-blown asthma attack from laughing so hard. Laughing out loud, very loudly, unable to catch my breath, almost vomiting, having to pause the show hard. In fact, I don’t know if I’ve ever been exposed to anything so hilarious in my life.

Bottom line, as far as entertainment goes, this one gets five stars. I guess with comedy, you can only rate content and delivery. He gets five solid stars in both categories. Go rent this one, friends. Just have your inhaler nearby when you watch it.

I Saved the Planet, Dudes

This column is 776 words long.